Interview,  Ben Goldscheider and the legacy of Dennis Brain

It's almost exactly a century since the birth of the British horn player Dennis Brain – a musician who, almost uniquely among horn players, would go on to achieve near-legendary status in his remarkably short career, curtailed by a fatal car accident when he was 36.

Brain inspired many composers of his time to write new works for the horn, and his death prompted a number of elegiac compositions in his memory. This is a thread that Ben Goldscheider continues in Legacy with new commissions of his own alongside works written for, and in tribute to, Brain.

I spoke to Ben about these works, the lasting influence of Dennis Brain's meteoric career, and the current state of horn-playing around the world.

Dennis Brain has attained an almost legendary status among horn players, not just as a performer in his own right but as the catalyst for a miniature revival of interest in writing for his instrument. Why do you think he had this particularly strong effect – was it merely a reflection of his exceptional talent, or something more?

Dennis Brain was playing the horn at a level which previously people had not experienced before. His technical assurance, nuanced phrasing and commitment to the instrument made him the most remarkable pioneer of the instrument. He achieved so much in such a short space of time, but the history of music has suffered irreparable loss due to his untimely death. One might say that this adds to the almost mystic aura with which he is now thought of. By all accounts, he was the most humble and gentle of characters, and it was perhaps this quality that made him so universally loved, in addition of course to his high level of musicianship.

How did the commissioning of Huw Watkins’ Lament come about – were you closely involved in the compositional process, or did you leave him to it?

I have always been an admirer of Huw’s music having performed his brilliant Horn Trio several times. When I was given the opportunity via the Guild of Hornplayers to commission him, I was absolutely delighted that he was happy to write something with this special project in mind. The result is a very poignant work, very much connected to a universal feeling of loss that we have all experienced in some way since March 2020. I respect him hugely as a musician and it was so exciting to know that as each day passed, more and more of this new piece was materialising on the other side of the country. One of the most remarkable things, in this respect, occurred at the first rehearsal: he pointed out to me that he had taken Dennis Brain’s initials (D-B) and my own, (BG) and used these four pitches as the main theme. Due to the transposition of the horn part, this was not something that I noticed immediately when preparing the piece by myself!

The three Panufnik works recorded here are instrumental versions of originally vocal pieces – did you find it helpful to keep their respective Shakespeare texts in mind when performing them, or did you approach them as completely blank slates?

I felt that it was very important that the horn part kept the text above the notes for a number of reasons. Firstly, the content of the music is inextricably linked to the meaning of the text and so it was important that both I understood this connection, as well as all horn players that choose to play it after me. In addition, the melodic line has not been altered at all so the shaping of the phrases is again linked to the words. The way in which the melody is constructed is linked to the syllabic distribution, to the melismas and of course to the structure of the poetic lines. I did my very best to keep this in mind whilst playing the music without the text.

It’s not easy to identify a stand-out figure comparable to Brain today, but Radek Baborák, with whom you studied, is surely a contender. How much would you say he has influenced the trajectory of your own career?

Well, Radek Baborák, like Dennis Brain, is a huge role model for me. It was a true honour to have spent four years studying with him in Berlin at the Barenboim-Said Akademie and I am very grateful that we have maintained a close relationship. As a horn player, he is truly remarkable and he has had arguably the greatest direct influence on the way I approach playing the instrument; his main focus as a teacher is on getting the instrument to sing and to build a very strong musical foundation that transcends all technical obstacles. In terms of my career, he is of course one of a very small number of people that play, for the majority of the time, as a solo horn player. In this vein, he has been a huge inspiration and I feel very humbled that we have had the chance to play many double concerti together. He even conducted me playing Gliere’s Horn Concerto in the Berlin Philharmonie!

It’s noticeable how different Baborák’s sound is to the recordings that survive of Dennis Brain. Have tastes changed among horn players in terms of tone and timbre in the sixty or so years since Brain’s death?

When Radek was growing up he lived in the Soviet Union where recordings of Western artists,such as Dennis Brain, were simply not heard behind the Iron Curtain. Therefore, what you have are a few schools of horn playing. The Russian and Czech ones are the obvious examples, which took a vastly different approach to what was going on in the UK and the US. When recordings became readily available, there was a standardisation of playing which can be seen not just through horn playing but also through the sound of different orchestras and other instrumental soloists. Today, it is rather difficult to speak of a specific school or country having a distinctive “sound” that is markedly different from another in the same way that they surely did several decades ago. Furthermore, Dennis Brain was playing an instrument from the early nineteenth century, the main feature of this being that the metal was much thinner and softer. It cannot be stressed enough what a difference that makes to the timbre, both in terms of colour but also in terms of volume. The present day expectations of orchestras are so vastly different that the instruments are really very difficult to compare: an instrument such as the one Dennis Brain played would simply not fit into a modern-day orchestra. 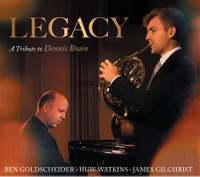 Legacy: A Tribute to Dennis Brain 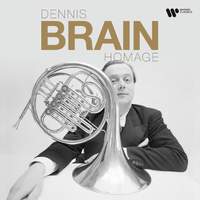