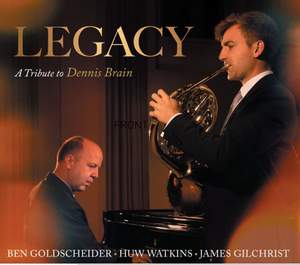 The magic starts with Huw Watkins’s purpose-built Lament for horn and piano, a wonderful beginner’s guide to the expressive colour range possible when a horn is allowed to sing, rage, and sigh…Watkins’s... — BBC Music Magazine, July 2021, 4 out of 5 stars More…

In every field there are individuals who, with their dedication and passion, change the course of history.

Dennis Brain was one such individual. He has often been heralded as awakening the horn from a long slumber, such was the comparative barrenness of the Romantic period in terms of compositions for a solo horn player. The Baroque and Classical period were rich in their output, with leading composers such as Vivaldi, Telemann, Haydn, Mozart and Beethoven writing soloistic music for the horn. This, however, was no great coincidence and it was due to the impressive characters of the time such as Giovanni Punto and Josef Leutgeb who inspired composers to write for this wonderful instrument.

It would seem that no such player existed, or was able, to inspire the likes of Tchaikovsky, Mendelssohn or Sibelius to write their horn concerto equivalents to their masterpieces for violin or piano. Despite Dennis Brain’s extraordinary horn playing and musicality, it is what he did for the instrument in general terms which continues to inspire me every single day. His legacy, the emancipation of the horn from its royal status in the orchestra to an instrument that was considered worthy of being heard in a soloistic fashion, was a remarkable feat. One has to pinch themselves when confronted with the question of “if only” when considering what may have been achieved had he not left us with so much more to give.

To be a young British horn player since Brain’s tragic death is to be part of an exceptional tradition and under the influence of a remarkable aura. I doubt there is a single horn player that has not marvelled at the dexterity and elegance of his playing as exemplified on his few but precious records. To listen to him dance and flit through the last movement of the Second Concerto by Richard Strauss is to listen to the epitome of grace and dexterity to which we all aspire.

Biographical information is plentiful and thus, I would rather express my deep gratitude and admiration to Dennis Brain for all he did for the horn. As we celebrate his centenary in 2021, his courage to push boundaries, be passionate and work tirelessly in pursuit of excellence could not be more prevalent to our own time.

With this disc, I aim to pay a humble and respectful tribute to his legacy. The structure of the album is such that there is music by two composers he worked with during his lifetime; Benjamin Britten and Sir Malcolm Arnold, music by two composers who wrote in his memory; Francis Poulenc and Sir Peter Maxwell-Davies and then, in the spirit of his passion and dedication towards new music, two commissions by Huw Watkins and Roxanna Panufnik, both of whom have written works which I believe will be in the standard repertoire for many years to come. It is with great pleasure that I share this album with you and I hope that it is as enjoyable to listen to as it was to create.

The magic starts with Huw Watkins’s purpose-built Lament for horn and piano, a wonderful beginner’s guide to the expressive colour range possible when a horn is allowed to sing, rage, and sigh…Watkins’s piano accompaniments are incisive, but it ’s Goldscheider’s horn, golden and glorious, that properly takes the crown.

Goldscheider’s intonation and phrasing are impeccable throughout, as are Watkins’s accompaniments...A fitting tribute to one of Britain’s greatest musicians.