2012 was in every sense a big year for the Royal Opera House: they entered into the Olympic spirit with not only Wagner’s Ring but also this new production of Berlioz’s five-hour Classical epic Les Troyens, which hadn’t been staged there for forty years. In some respects it’s easy to see why: one of the longest ‘single-sitting’ operas in the repertoire, it requires a massed chorus and corps de ballet, consummate singing actors in some tricky-to-cast roles and of course some serious magic in terms of visual impact. 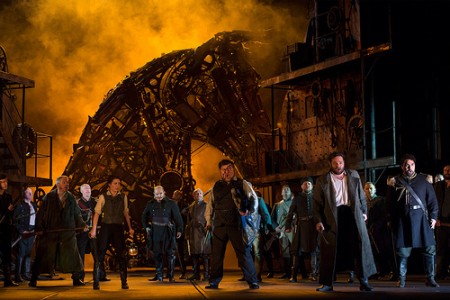 Es Devlin’s sets certainly supply the latter in spades - so much so that on the afternoon I was there the audience erupted into spontaneous applause at curtain-up! The first two acts, which deal with the Fall of Troy, revolve around a stark monochrome citadel: overtones of the Industrial Revolution here, with the costumes reflecting the time when the opera was written rather than Classical antiquity; the three ‘Carthage’ acts take place in a bright terracotta kasbah (director David McVicar was apparently inspired by a line in Virgil which compares Carthage to honeycomb). But the tour de force is the giant, flaming Trojan horse, sculpted from the detritus of war: it dominates the stage at the end of Part One and returns, terrifyingly, reformed as Hannibal in the final tableau as the Trojans dream of an avenging angel.

This was one of those productions where disappointment at a star’s absence turns to delight at a new discovery: I’d been crestfallen when an ailing Jonas Kaufmann withdrew from the role of Énée six weeks before opening, but his replacement Bryan Hymel delivered something very different, very special and (dare I say it?) more authentically ‘French’-sounding than Kaufmann might have been. That he also went on to take over from Juan Diego Flórez, in Robert le Diable, gives some idea of the remarkable combination of vocal qualities at work here: it’s a voice that not only sits very high but is also capable of slicing through Berlioz’s heftiest orchestration, and he brought the house down in his final punishing scene. He’s still only 34, a baby in terms of heroic repertoire, and I can’t wait to see what he'll be doing in five years’ time.

The other stand-out performance came from the Italian firebrand Anna Caterina Antonacci as doomed prophetess Cassandre: riveting from her very first line, she brings a no-holds-barred physicality to the role and hurls out her imprecations like a true French tragedienne. Her performance alone would have been worth the price of my ticket.

Eva-Maria Westbroek makes for a radiant, vulnerable Didon, stronger on womanly sensuality than regal hauteur or hell-hath-no-fury: it’s an unconventional characterisation, perhaps, but here it contrasts nicely with Antonacci’s white-hot theatricality. Her big, bright soprano throws a different perspective on a role more usually assigned to lyric-dramatic mezzos, and there’s no want of warmth in the middle range, where so much of this music lies.

There are some superb cameos, too: with her incisive bottom register and magnetic stage-presence, the young Polish mezzo Hanna Hipp will surely make a fine Queen of Carthage herself, and Ed Lyon delivers a heart-stopping account of the young sailor Hylas’s lament for his homeland, despite being suspended in a vertigo-inducing crow's-nest! Barbara Senator’s boyish frame made her totally convincing as Énée’s young son in the opera-house, and she comes across amazingly well on-screen too, especially in her impish attempts to play Cupid.

Yes, it’s a long session’s viewing (the beauty of DVDs is that you can make ‘cuts’ of your own if the lengthy ballets get a bit much!), but this was one of the operatic highlights of 2012 and it retains much of its impact in this excellent DVD transfer. 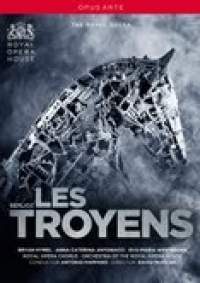 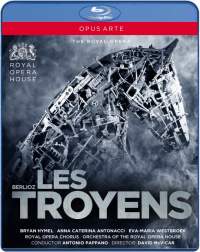