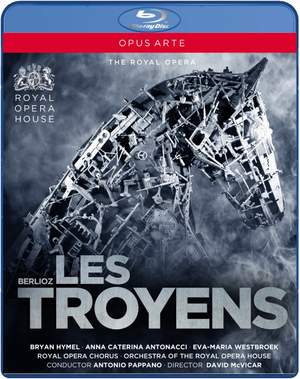 It's powerful in all senses, not least Antonio Pappano's conducting, which is dramatically hard-driven but not without atmosphere, making the love music luminously sensuous...The huge cast is... — BBC Music Magazine, January 2014, More… 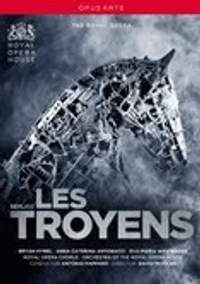 Les Troyens is a tour de force that ranges from fiery military marches to intense choruses, passionate soliloquies and the lyrical love duets of Dido and Aeneas. For Hector Berlioz, librettist and composer, the opera became the work of decades and the passion of a lifetime, the culmination of his literary love affair with Virgil's Aeneid and with two tragic heroines, Cassandra and Dido. David McVicar's staging is on an enormous scale, assembling one of the largest casts ever seen at Covent Garden. The sweeping theme of the rise and fall of empires runs throughout Les Troyens, along with moving meditations on love and honour.

It's powerful in all senses, not least Antonio Pappano's conducting, which is dramatically hard-driven but not without atmosphere, making the love music luminously sensuous...The huge cast is uniformly good and sometimes exceptional - especially tenor Bryan Hymel's Aeneas...It's an intelligent, theatrically energetic staging.

It is magnificent...McVicar marshals his huge forces with a sure hand and shows an impressive concern for detail...[Antonacci's] every phrase, every gesture, is mesmerising...Westbroek as Dido is so heartbreaking in the final scenes that you forget how dramatically inept they are; and Bryan Hymel is a match for Davis's Jon Vickers

Es Devlin’s set designs are brilliantly realised and effectively done...[Antonacci] is a magnificent Cassandra, worthy to compare with the best of them...it is [Westbroek's] humanity and vulnerability that impress most...Listening to [Hymel] you are never in any doubt that you are listening to a hero...this release is a triumph.

Devlin’s sets certainly supply visual impact in spades...Hymel deliver[s] something very different, very special and (dare I say it?) more authentically ‘French’-sounding than Kaufmann might have been...[Antonacci] brings a no-holds-barred physicality to the role...Westbroek makes for a radiant, vulnerable Didon...this was one of the operatic highlights of 2012 and it retains much of its impact in this excellent DVD transfer.