It was inevitable that the English tenor Ian Bostridge would play a prominent role in the celebrations for Britten’s centenary year: the composer wrote some of his most glorious music for his partner and muse, the tenor Peter Pears, and although we live in an age of fine Britten singers, for many people Bostridge has inherited Pears’s mantle. His instantly identifiable timbre, formidable musical intelligence and the insight that he brings to the often thorny texts which Britten set have worked miracles on the song-platform and in several of the great operatic roles (some of you may already have heard his bone-chilling singing on the new Rape of Lucretia, which I mentioned in these pages earlier this year). I first fell in love with much of Britten’s music through Bostridge’s recordings, so it was an immense pleasure to meet up with him recently for a chat: you can watch the video-interview below. 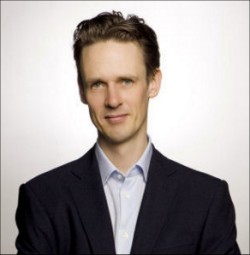 The main topic of our conversation was an intriguingly cosmopolitan song-recital, released last Monday, which includes songs in German, English, and Italian as well as texts translated from Chinese.

For me, the glory of the disc is the incendiary account of the Michelangelo Sonnets, settings of love-poems which the great Renaissance polymath wrote for his beloved Tommaso dei Cavalieri. These extraordinary texts are some of the first which Britten set for Pears, in 1940, and the unabashed homoeroticism of both text and music made me marvel at the fact that the couple premiered the cycle in wartime London, when homosexuality was still illegal and when their public standing was already rocky because they’d recently returned from America as conscientious objectors.

The music is quite unlike anything else by Britten, shot through with pastiches of the great Italian song and opera-composers: Ian told me that Sir Antonio Pappano (who accompanies all but the Chinese Songs on this disc) was forever pointing out flashes of Tosti, Donizetti and even Puccini as they explored the songs together! The combination of Bostridge and Pappano is nigh-on ideal here, with Pappano’s big-boned, virile pianism providing the perfect foil for Bostridge’s distinctive plangency. There are occasional moments of strain in the taxing, high-lying vocal line, yes, but these all work in service of music dealing in frustration, self-doubt and anguish rather than idealised romantic love (Ian suggested that at the time of writing Britten did not yet know Pears’s rather idiosyncratic voice as well as he came to do!).

The other cycles on the disc are equally rewarding, particularly the much-recorded setting of Thomas Hardy’s Winter Words, where Bostridge’s uncanny gifts for narration and characterisation of reported speech really make you listen with fresh ears: listen, for instance, to his portrayal of the officious vicar in The Choirmaster’s Burial, who could have leapt straight from the pages of Albert Herring or Peter Grimes, or to the Winterreise-like dialogue of the boy-violinist and the convict in At the Railway Station. The autumnal beauty of the Hölderlin Fragments also comes off hauntingly: whilst Bostridge is generally something of a vocal Dorian Gray, retaining astonishing vocal freshness over the decades, the slightly darker hues and hints of graininess in evidence here made me rejoice that he’d waited until this stage in his career to set these particular songs down on disc.

Last but not least come the wistful yet exuberant Songs from the Chinese (written in 1957 for Pears and Julian Bream) where Bostridge is joined by dazzling young Chinese guitarist Xuefei Yang: their manic account of the Bacchanalian Dance-Song, describing the death of a unicorn, has to be the most exhilarating finish to an album I’ve heard all year! 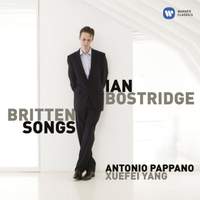