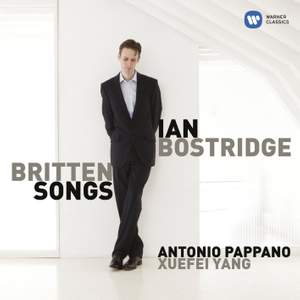 [Bostridge] has surely done nothing finer than this immaculately recorded new release. He is superbly partnered by Antonio Pappano, whose balancing of textures and beauty of touch sometimes surpass... — BBC Music Magazine, July 2013, 4 out of 5 stars More…

2. Midnight on the Great Western (or The Journeying Boy)

3. Wagtail and Baby (A Satire)

5. The Choirmaster's Burial (or The Tenor Man's Story)

7. At the Railway Station, Upway (or The Convict and Boy with the Violin)

Britten: Who are these children?, Op. 84: Four English Songs

No. 9 Who are these children?

Britten: Songs from the Chinese, Op. 58

The Big Chariot (from The Book of Songs)

The tenor brings formidable musical intelligence to the Michelangelo Sonnets, Who are these children?, Winter Words and the Hölderlin Fragments (with Antonio Pappano), and is joined by guitarist Xuefei Yang for Songs from the Chinese.

This release is one of three new recordings issued in 2013 by EMI & Virgin Classics in honour of Britten's 100th birthday. Ian Bostridge, the internationally acclaimed tenor whose "attention to the text always matches Britten's own scrupulous word-setting", has recorded this album of songs by Benjamin Britten accompanied by Antonio Pappano. Featured are works he has never before recorded: 'Seven Sonnets of Michelangelo', 'Hölderlin Fragments', 'Songs From the Chinese', 'Winter Words' and Four English Songs from the last cycle 'Who are These Children?'.

[Bostridge] has surely done nothing finer than this immaculately recorded new release. He is superbly partnered by Antonio Pappano, whose balancing of textures and beauty of touch sometimes surpass - dare it be said? - Britten's own recordings...an essential addition to the Britten discography.

an intoxicating contribution to the composer’s centenary.

besides his usual intelligence and personality, Bostridge has acquired a richness of timbre that, combined with his control of vibrato, is invaluable in the Six Hölderlin Fragments...[Songs from the Chinese] becomes an unexpected highlight.

[in Winter Words] the singer seizes every opportunity the words offer for brilliant characterization...Such fine attentional is characteristic of the entire recital...Yang is, like Pappano, no mere accompanist but an admirable partner to Bostridge...as a contribution to the Britten centenary this indispensable disc may conceivably be equalled - but it will certainly not be bettered.

The combination of Bostridge and Pappano is nigh-on ideal [in the Michelangelo songs], with Pappano’s big-boned, virile pianism providing the perfect foil for Bostridge’s distinctive plangency...The other cycles on the disc are equally rewarding.

the English tenor has brought special qualities to Britten on disc: his cut-glass diction and an individuality of timbre that echoes the singer for whom the composer wrote most of his songs, his life partner, Peter Pears, without remotely resembling him...here he proves as compelling as this music’s creator

all of these are very fine performances, which at least match and in some cases better Pears's own recordings with Britten. Bostridge and Antonio Pappano define the sharply different characters of the three great cycles here quite superbly.