Pianist Peter Jablonski has an extensive discography in which Romantic repertoire and composers from Eastern Europe loom large. It was therefore perhaps inevitable that, sooner or later, he would return to the music of Alexander Scriabin - arch-Romantic, visionary and mystic. Peter's latest album, and his first on the Finnish label Ondine, showcases Scriabin's mazurkas - unique interpretations of this well-loved dance-form.

I spoke to Peter about Scriabin's music, and about his own relationship with it.

Scriabin’s output for the piano is quite varied, with sonatas and preludes as well as various dances. What led you to record a whole album of just his mazurkas?

I have played works by Scriabin throughout my career, as well as performing mazurkas by many Polish composers, such as Maciewski and Szymanowski. Chopin mazurkas have always been especially close to my heart, maybe because I am half Polish. So, when my partner suggested that I should combine my two passions and look into Scriabin mazurkas for my first collaboration with Ondine, it made perfect sense and led me to the discovery of the beautiful and enigmatic world of Scriabin mazurkas.

Analyses of Scriabin often refer to his thinking about the relationship between sound and colour, particularly in his later orchestral works. Do you find this informs your approach when preparing and performing the solo piano repertoire?

Of course. I don’t have synaesthesia, but both my piano teachers spoke to me about music in colour and scents. I always found this kind of approach to musical interpretation closest to my own feelings and thoughts about the music I played. When I learnt these mazurkas, it was difficult to get away from the sense of Scriabin colouring with sound, literally painting with the colours of the piano the moments he wanted to capture. One can almost smell the scents of some of his ‘musical paintings’. And it is precisely because of these colours that these mazurkas are so open to interpretations—they are not pieces rigidly recorded with musical notation. Some of them do not have any indications of tempo or mood, so the performer is free to listen to his or her own feelings about these pieces.

The earlier mazurkas show clear influences from Chopin, but the latter works have a distinct harmonic language of their own. Do you think Scriabin was consciously moving away from Chopin’s style to do something decidedly different, or merely evolving it into its next stage?

By the time he wrote his later mazurka opuses, he had already become his own composer, a real Scriabinist. He did not on purpose try to move away from Chopin, but rather already moved away so much from that language that it was inevitable that his later mazurkas would be so different. These are tone poems, notated dreams, moments of colours and scents, with rhythmical hints of the mazurka.

Biographers of Scriabin note that as a young man he permanently damaged his right hand practising technically demanding works by Liszt and Balakirev, for which his hands were simply too small. Do you find that his own piano writing poses correspondingly less of a physical challenge to the fingers than is the case for his contemporaries?

Nothing could be more demanding for the piano than some of his etudes and sonatas, in not only pure finger dexterity, but also in the chordal playing, which is of unusual difficulty. He was constantly pushing boundaries musically and technically, and, knowing his character, I am sure he would not make concessions that would have the potential to jeopardise his musical aesthetic. His works are difficult to play, but what a reward they bring when the technical difficulties are surmounted, and when the music can soar above the ‘mechanics’, so to speak.

You recorded several albums of Scriabin’s piano works earlier in your career, both solo and orchestral; has your approach to him changed between then and now?

It is natural for aesthetic and creative evolution to take place during a performer’s career. It is true for me also: my approach to musical creation and interpretation is very different now, in that I feel there is much more space around each work as I prepare it for performance. This space allowed me to dig deeper into each composition and investigate the many interpretative possibilities it may offer. The many experiences I went through in my life, both professionally and personally, now allow me to see things differently, to feel music differently, I would say from a much closer, human, perspective, and focus on the creation of sound, on the overall aesthetic of the work. In Scriabin’s case, I found that recording his mazurkas, which are very personal, intimate pieces, the sum of my life experiences helped me to get even closer to him than before. This Scriabin was new to me, and I hope the listeners will feel that.

Can you tell us anything about your future plans – are you intending to stay with Scriabin for the time being?

I will put Scriabin aside for a while, but not too far away. My next recording project for Ondine focuses on Scriabin’s contemporary, his fellow music student and colleague, Alexey Stanchinsky (1888-1914). He is said to have been one of the most, if not the most, original composer of his generation, but his early and mysterious death at the age of only 26 meant that we will never know what would have become of him. His music shows his genius, originality of musical and harmonic thinking, while at the same time of course demonstrating that he belonged to that exciting time in Russian musical history which also gave birth to Scriabin.

It is certain that Stanchinsky found his own voice very early on—some of the works written when he was 18 are very original, and I look forward to introducing him to wider audiences. 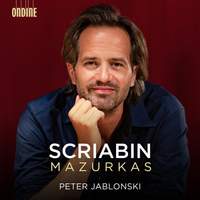