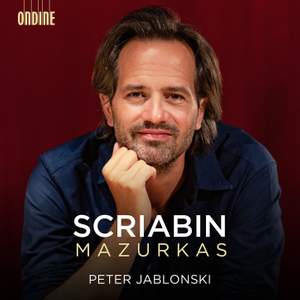 Scriabin’s Mazurkas have tended to be side-lined by his Preludes, Études and Sonatas, but they are little jewels, especially in Peter Jablonski’s hands. He’s helped by the warm, full tone of... — BBC Music Magazine, June 2020, 5 out of 5 stars More…

The pianist talks to David about his recently-released album of Scriabin mazurkas on Ondine.

This album marks Peter Jablonskis debut for the Ondine label. Alexander Scriabin (18721915) created an impressive catalogue of works for the piano and became one of the great innovators in 20th century music. In his early works, the listener can sense the composers great admiration for the art of Frédéric Chopin. This is especially manifested in the over 20 Mazurkas that Scriabin wrote for the solo piano, the very same form of music that Chopin followed throughout his active years as a composer. Jablonski's album includes all Scriabin's Mazurkas with an opus number as well as two early Mazurkas.

Scriabin’s Mazurkas have tended to be side-lined by his Preludes, Études and Sonatas, but they are little jewels, especially in Peter Jablonski’s hands. He’s helped by the warm, full tone of a Fazioli piano, richly recorded in the concert hall attached to the maker’s factory in Sacile, Italy… The mastery of composer and performer is riveting.

Jablonski brings extraordinary finesse to these dances, imbuing them with an unmistakable Weltschmerz that perfectly conjures the fin de siècle...There are occasions when one might wish for greater dynamic contrasts, until realising that would necessarily rob these superb performances of a good deal of their subtlety and understated charm. There’s much to enjoy here.

Beautifully played...The Op 3 set of 10 are imprinted with the precursor, and are attractive, but the Op 25 nine are something else, touched with a harmonic magic.