This coming Friday sees the release of Fenella Humphreys’s recording of Max Richter’s Vivaldi-inspired Four Seasons Recomposed with the Covent Garden Sinfonia and Ben Palmer on Rubicon; the British violinist has form when it comes to baroque-inspired contemporary music, having won a BBC Music Magazine Award in 2018 for the second volume of her Bach2 The Future project featuring new works which she commissioned for performance alongside Bach’s solo sonatas and partitas.

I spoke to Fenella recently about how Richter’s concertos relate to Vivaldi’s originals, the parallels between the new album and Bach2 The Future, and the connections between Four Seasons Recomposed and the pieces by Vasks and Pärt which also feature on the recording.

For your new album you’ve presented Richter’s 'recomposed' Four Seasons without the original Vivaldi. Were you especially keen to present the piece on its own terms, or did you simply feel that the world doesn’t need another recording of the Vivaldi?

I would love to record the original Four Seasons one day. I think that of any work in the violin repertoire Vivaldi gives you so much scope for creativity and colour, particularly through his written descriptions and sonnets, that you could never come to the end of the possibilities contained within the music. I never learnt them as a kid and then avoided them for years, partly because I’d become so accustomed to hearing them in the background that I didn’t realise how brilliant they really are. When I was finally booked to perform them a few years ago, and forced to learn them, I was actually really pleased to be coming to them fresh and without preconceptions.

For this project we would have been quite pushed to fit both sets of Seasons (Vivaldi and Richter) on a single disc. Richter’s Seasons deserves to be heard on its own terms, rather than in a direct comparison like that, and it felt right for this disc to put his music in a different context.

Have you had any direct contact with the composer while working on the piece?

One of my friends performs with the American contemporary group ACME, an ensemble he often collaborates with. It just happened that both when I was recording the piece, and when I’ve been performing the work more recently, they’ve been on tour together so I was able to pass questions directly to him when I needed. Having said that, there is so much clarity to his writing that there was amazingly little I needed to check.

How much Vivaldi is there in the recomposition, and do you find it helpful to keep the original in mind when performing this piece?

Although the basic shape of each concerto remains pretty much the same (four concertos, each with three movements) Richter is really imaginative in the different ways he treats the original Vivaldi material going through the work. Autumn 2, for example, is presented pretty much in its original form. In Winter 2 the violin part remains basically unchanged except for the instruction to play ‘molto rubato ad lib’, but instead of Vivaldi’s raindrops in the accompaniment, the violin melody is cocooned in beautiful harmonics, creating an incredible feeling of tenderness and intimacy. If I had to pick a favourite point in the work it would probably be this. In some movements he will take entire themes or passages, sometimes re-harmonising, or maybe adding new worlds of sounds to the original melody, and again at other times playing with and distorting the rhythm. In other movements he will take tiny cells or fragments of the original Vivaldi and create an entire new piece out of them.

When you’ve performed the original it’s impossible to come to Richter without having it in mind, informing your immediate understanding of the characters. There’s something extremely liberating about throwing yourself into this new world, whether it’s exploring his distillation of the characters, or finding new sound-worlds that belong with his reimagined harmonies and textures. Coming back to the original Vivaldi after performing Richter I’ve found that I’ve had my ears opened to new possibilities.

Your Bach2 The Future albums also centered on music inspired by landmark baroque repertoire; did this latest project grow out of that, and do you have plans to explore more reimaginings of baroque composers?

I actually hadn’t thought of that until your question! I originally decided to commission my Bach partner works because I felt there wasn’t enough contemporary unaccompanied violin repertoire, and partner works to something known and loved seemed to be a promoter/audience-friendly approach. For that project the idea was different in that I asked composers to create something to stand alongside a specific Sonata or Partita - how they interpreted that brief was up to them. Some just wrote music that wasn’t in any way related, some took the essence of Bach but wrote something basically new, and others took ideas or fragments of their chosen Bach work and wove them into their new piece. In fact, the choice of Richter for this album was simply because the music is so great and the conductor, Ben Palmer, and I both really wanted to collaborate on it.

Generally I like to put together programmes and projects that have some sort of thread running through, so partner works and reimaginings like this can work really well. For next season there are two projects that loosely work around this idea. One is based around solo caprices and studies, not reimagining specific works, but playing with the idea of exploring techniques or fragmented thoughts, and putting new works side by side with caprices from great composer/violinists of the past. The other project is also somewhat accidentally based around Vivaldi’s Four Seasons as I’d started planning it long before we’d even thought of working on Richter. It will be a different sort of reimagining, taking Vivaldi's original music but in a new version for violin, accordion, double bass and percussion, and linking the four concertos with three new works for the ensemble by Cheryl Frances-Hoad, Bethan Morgan-Williams and Adrian Sutton.

Do you see any connections between the Vasks and Pärt works on the album, or do they inhabit quite different musical spaces?

Although the three composers are extremely different on paper, we chose Vasks and Pärt to complete the disc because we felt that all three works explore different aspects of similar worlds. There is a simplicity and immediacy to all of the works, but one that never fails to move. For me, the Richter finishes in a very intimate, almost hopeless, place. Lonely Angel by Vasks grows out of a very similar emotional world. The way the violin sings, often stratospherically high above the orchestra, is a technique also used in places by Richter. Pärt finds a different way to this meditative simplicity. Fratres is one of his early work exploring what he called Tintinnabulation, a style of writing borne out of his study of medieval church music: ‘I have discovered that it is enough when a single note is beautifully played. This one note, or a silent beat, or a moment of silence, comforts me. I work with very few elements – with one voice, two voices. I build with primitive materials – with the triad, with one specific tonality. The three notes of a triad are like bells, and that is why I call it tintinnabulation.’ Elements of the violin writing in Fratres, such as the fast broken chords, wouldn’t be out of place in Vivaldi. We also feel that the full circle of the programme on the album, from the awakening birdsong at the start of Richter’s Spring 1, arching through a whole world of emotions, and finally arriving at the incredibly beautiful and intimate peace in the close of Fratres, is a really special journey.

A review of your Southbank Centre performance drew parallels between the Richter and the soundworld of the many 'dark crime dramas' that have proliferated since the piece was composed - have you come across any other scores composed in the interim (either soundtracks or otherwise) that strike you as being influenced by the piece?

I have to admit I’ve never watched any dark crime dramas because I’m a total wuss. I haven’t specifically noticed other works taking lead from Richter in this way, but the beauty of his harmonic language, and particularly his string writing, couldn’t fail to influence once you’ve heard them. 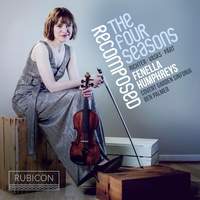 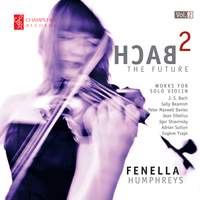 'It’s not often that you can say that a commission, or set of commissions, fills a genuine hole in the repertoire. However, that’s precisely what Fenella Humphreys has bestowed upon the musical world with ‘Bach 2 the Future’...the new works themselves deserve long wider performance lives beyond this beautiful beginning.' (Gramophone) 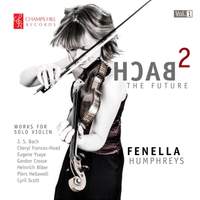 'An intriguing project by violinist Fenella Humphreys, who is commissioning new British companion pieces to Bach’s six iconic sonatas and partitas. Here she performs the first three commissions, alongside a spirited yet unhurried account of Bach’s E major Partita. Cheryl Frances-Hoad’s Suite No 1 is a vibrant response to that work' (BBC Music Magazine)