Rory McCleery and his six-strong Marian Consort have released a number of acclaimed recordings with Delphian Records in recent years - with repertoire ranging from the Tudor-era Baldwin Partbooks to the contemporary Michael Berkeley. Their latest album focuses in on a unique period of Iberian musical history - the occupation of Portugal by the Spanish Habsburgs, and the hidden and coded responses that this provoked from Portuguese composers and musicians.

I spoke to Rory about his interest in this period, and about what makes the Portuguese Renaissance style so distinctive and unmistakable.

The Iberian school of polyphony is generally regarded as being more heart-on-sleeve, more full of pathos, than some other schools of the time. Do you think this is accurate, or is it something of a stereotype?

I think that certainly plays into it. It’s a truism to say that there is indeed a very distinct Iberian style, which is very different from the polyphony of England or Italy – and of course both England and Italy’s styles are distinctive in their own way too. But it has to do with time as well as with geography: within a period of about fifty years music has become different. That’s something that we easily forget, particularly when we’re talking about Portugal, and to a lesser extent Spain too – these are composers who are writing at the very end of the Renaissance. For instance, if we compare the music of Gesualdo, writing at the beginning of the seventeenth century (or even Monteverdi) to those who were writing in the middle of the sixteenth century like Clemens non Papa, they’re very different stylistically.

But there’s certainly something about the style which does seem a little more emotionally direct. Writing towards the end of the sixteenth century and the beginning of the seventeenth, they must have been at least tangentially aware of developments in harmony in continental Europe and the way that it was being used to colour secular texts in particular. That finds expression in Spain and Portugal in sacred music; because there’s not so much of that madrigal tradition in those countries, it finds its way into the setting of sacred texts instead.

How much do you think this period of political oppression in Portugal, which finds expression in these works, was key in shaping that Iberian style? Might its music be less striking if the politics had fallen out otherwise?

Absolutely. It would be very easy to make sweeping generalisations, but I think some of these works are rooted very specifically in that period from 1580 to 1640 when the Spanish Habsburgs are ruling in Portugal, in particular the music of Duarte Lobo, because he was so well-known to the future John IV of Portugal. They were evidently quite close friends, so it’s clear that works like the Missa Veni Domine were intended in part for his attention. The fact that the allusions are so pointed allows us to infer that quite confidently.

With some of the other works, it’s a little harder; some of them were written at the fringes of that time-period, and the texts are more generally lachrymose. It’s difficult to say whether a composer deliberately choosing to set a sad text was necessarily a political decision, or whether it was simply that these texts provided more scope for harmonic and emotional nuance. But some pieces, particularly the Lobo Mass, are absolutely keyed into this moment in Portuguese history. One can quite easily imagine composers making political statements in a quiet way through their textual choices. It’s very easy for us to say this in hindsight because we’ve got overt examples like Byrd, so it’s tempting to conclude that everyone was doing it - but I do think there’s definitely evidence that some of these composers were thinking in those political terms and making very pointed choices about their texts and the way that they chose to set them.

Within Iberia, do you think there are discernible sub-styles – perhaps affected by the relative duration and extent of Moorish influence in Portugal as distinct from, say, Andalusia or Catalonia?

I think I’d ascribe it much more to chronology than geography. Portugal is probably more isolated than Spain, and that’s apparent from the way composers are still writing in this relatively old-fashioned style well into the seventeenth century. Even someone who we think of as a mainstay of the Portuguese school like Duarte Lobo – he’s publishing his motets in 1621, which (to put it in very simplistic terms) is of course eleven years after Monteverdi has ‘invented’ the Baroque! Obviously the history of music is much more fluid than those wallcharts with lines dividing up the periods, but there’s a clear shift going on in continental Europe and to some extent in Spain. I think there’s more crossover between Spain and continental Europe than with Portugal; particularly after this period of rule by the Spanish Habsburgs, Portugal tends to be musically somewhat isolationist, because they’ve got their new identity and they want to shape that without being influenced by other things, places and people. That’s not the whole story, of course; there are a lot of composers who flit between the two places, but I think it’s a matter of chronology more than anything else.

There was considerable musical interchange between Madrid and Venice during this time, leading to a rather cosmopolitan style with features influenced by Palestrina – did something similar occur with Portugal, or was it a more insular and self-contained musical world?

I think it was, yes. Of course there’s contact between Spain and Portugal, with plenty of composers from each country spending their careers in the other – but perhaps there’s a connection to this period of rule from outside by the Spanish Habsburgs, and then the feeling of rediscovering the Portuguese national identity when John IV takes the throne. John IV himself was an avid supporter and performer of music – there’s a setting of Crux fidelis that’s been attributed to him, and he had an extensive music library which unfortunately was destroyed in an earthquake about 100 years after he’d amassed it. Although a lot of the pieces don’t survive we do have the catalogues, so we know what was in there.

There’s also an awful lot of music by Portuguese composers that stayed within Portugal; Lobo is an exception, with his Mass and motets composed in 1621, of which a copy even ended up in the Bodleian Library in Oxford! Likewise, Portuguese composers themselves didn’t travel as much as their Spanish counterparts; if we think of Morales and Guerrero, figureheads of the Spanish Renaissance, both of them spent time in Rome (and Guerrero indeed went on to the Holy Land) and they published in Rome and Paris. They were truly European, continental and cosmopolitan in a way that perhaps not all Portuguese composers were – although Lobo certainly had music published in Belgium.

Hindsight allows us to draw connections between liturgical texts and the secular troubles of the times, and to find musical allusions subtly emphasising the subversive connotations of a given passage. But do you think these coded messages would have been picked up on by listeners at the time?

It comes down to the question of for whom the music is written and performed, and which parts of it are for which parts of those audiences. So often we find musicians writing music serving a dual or triple function, in that they’re writing music that is ostensibly for the Rite of the Catholic Church but also has these little traits that are for the edification or amusement of the performers – that tradition goes all the way back to Josquin, de la Rue, and Ockeghem.

And I think something like that is going on here; it wasn’t intended that everyone, or even most people, would get the allusions. If you knew the Palestrina motet Veni, Domine on which the Mass is based, you would have picked up on it. But I don’t think the average person attending Mass would necessarily have said “Oh, I get it; it’s by Palestrina”. For them, the music was for their edification and to encourage them towards the glory of God. The musicians, though, would have been more likely to recognise the piece and cotton on to what Lobo was doing. If you’re making a political point like that, it’s probably better if not everyone understands it! But we can speculate that it may have been aimed specifically at John of Braganza (the future John IV), because as a music-lover and a noted collector of music, he would almost certainly have known this Palestrina work. Lobo may even have introduced him to it, and then when he wrote the Mass John would surely have seen what he was driving at and concluded that his sympathies lay with the rightful Portuguese monarchy.

Nearly half of the tracks on this album are world-premiere recordings. How did you first encounter these works, and why do you think they have fallen out of the repertoire?

Ready access to scores was the main obstacle. With the exception of Lobo, a lot of this music doesn’t survive in very many places, and most of it is only preserved in Portugal, which means that the dissemination of it was limited, and it didn’t form part of the early-music revival in the twentieth century. We know that some of these societies, such as the Society of Ancient Music (not to be confused with today’s Academy of Ancient Music), who were a group of gentlemen in the eighteenth and nineteenth centuries who met in London to sing through old music, were performing Lobo’s works. But for most of the others, the lack of dissemination of their music made a big difference.

My own interest in this repertoire was instilled in me through my undergraduate studies; I was fortunate enough to take a course on Iberian polyphony with Owen Rees, who is a fantastic scholar and also a passionate advocate of this repertoire as a performer. While there are quite a few pieces on this recording that have been recorded for the first time (including the Missa Veni Domine), works by those composers have been recorded elsewhere – so it was a matter of investigating what else they had written, delving through catalogues and in some cases transcribing works myself either from facsimiles of the originals, copies of the original partbooks, or prints.

One of the things I love about working in this field is that you can make world-premiere recordings of music that is five hundred years old; there is such a wealth of great repertoire from this period which I think we can all agree is deserving of wider dissemination, and merits being better known by listeners and indeed by performers. 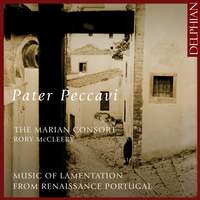 Pater Peccavi: Music of Lamentation from Renaissance Portugal was released on Delphian on 19th October. 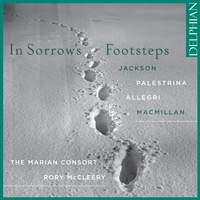 In Sorrow's Footsteps, released in July 2018, traces a web of musical connections between past and present, all interwoven with Allegri's immortal Miserere. 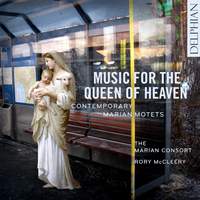 Music for the Queen of Heaven

Music for the Queen of Heaven, from 2017, sees the consort fully embrace its name by exploring motets in praise of Mary by contemporary composers such as Judith Weir, Roxanna Panufnik and James MacMillan.