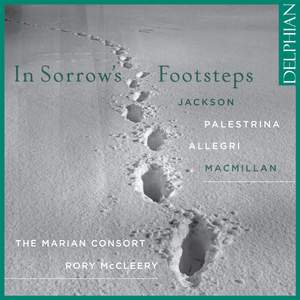 The sharp, jabbing gestures at the opening of Gabriel Jackson’s new setting of the Stabat Mater…announce that wilting introspection is by no means the composer’s default position in his response... — BBC Music Magazine, August 2018, 4 out of 5 stars More…

Celebrating its tenth anniversary with its tenth recording on Delphian, The Marian Consort plays to its twin strengths in a lovingly conceived programme coupling two pillars of Renaissance polyphony with twenty-firstcentury settings of the same texts, including a newly commissioned Stabat Mater by Gabriel Jackson.A range of subplots Palestrina's influence on Wagner, Charles Burney's collecting of Allegri and Palestrina make this truly a story of interconnections: a path on which the present's footsteps constantly overlay the past's. At the centre is Allegri's Miserere,whose convoluted reception history itself becomes part of the story and whose performance here fully exploits the world famous acoustic of Merton College's chapel.

The sharp, jabbing gestures at the opening of Gabriel Jackson’s new setting of the Stabat Mater…announce that wilting introspection is by no means the composer’s default position in his response to the sorrowful vision of Mary witnessing her son’s crucifixion…The ten singers of The Marian Consort buy fully into Jackson’s immersive setting, their interactions at times possessing the immediacy of chamber opera.

The past and the present move hand-in-hand in this well-devised programme. Gabriel Jackson’s setting of the Stabat Mater is startling in its concept. The declamatory opening starkly sets the horrifying scene, but the mother’s grief, which is beautifully expressed, is paramount. James MacMillan’s passionate interpretation is very much of the 21st century, although deeply rooted in the past: with this composer you get the best of both worlds. The Marian Consort is an exceptional group. Here you can savour beautiful vocal lines that are given wonderfully controlled, electrifying performances.

Jackson’s arresting Stabat mater is the stand-out on this tenth-anniversary album from the British vocal consort; the writing almost out-MacMillans MacMillan in places with its Scotch snaps and folkish flourishes in the ‘Eja Mater’ section. The acoustic of Merton Chapel pays real dividends in Allegri’s setting of the Miserere, whilst James MacMillan’s expansive setting of the same text doffs its cap to its predecessor at the same time as being entirely mesmerising on its own terms.

Thematically linked to the Passiontide season, this disc displays refined singing from an extremely polished ensemble consisting of six singers. The ensemble is well captured in the recording … Although the disc contains much Renaissance music, the contemporary works by Gabriel Jackson and James MacMillan showcase the true versatility and musicianship of the group. Jackson’s powerful and moving setting of the Stabat Mater was specially commissioned for the recording and is uncompromising in its vivid reflection of the theme of the text.