Regular readers may recall how much I enjoyed the Viennese countertenor Max Cencic’s elegantly-sung tribute to Nicola Porpora, the Italian operatic composer and singing-teacher who was responsible for training two of the greatest singers of the eighteenth century, Farinelli and Caffarelli. It was a huge pleasure to speak to Max (who is an astute, imaginative stage-director and something of an impresario as well as a very fine singer) recently about the draconian demands of Porpora’s vocal writing, his relationship with his singing-students and contemporaries, and the impact which he (as well as his two star pupils) had on the evolution of opera seria…

Porpora produced a vast amount of very attractive music (almost sixty operas) but his popularity was relatively short-lived, even within his own lifetime: why do you think he has never gained the foothold of Handel or Vivaldi?

I think it's an extremely simple explanation: these sorts of operas are extraordinarily complex and they need exceptional singers who are technically very agile and virtuosic, so it's not at all easy to perform or produce them. And things are also incredibly demanding for the orchestra in places: the horn parts are so difficult that you may only find a few people world-wide who can actually play them! Secondly, of course, it's a question of time and fashion: things are forever falling in and out of style, and we just have to excavate them! It's really nice to see people once again finding this attachment to a type of music that can be truly mesmerising - out of this world, in fact!

In the booklet-notes you describe Porpora as being 'almost sadistic' – could you tell me a little more about how he goes above and beyond what his contemporaries were asking from singers?

I think that his way of writing is very much based on technical demands and the idea of ‘stages of excellence’. If you sing the operas of Hasse or Handel or Vinci, you will find yourself vocally way more comfortable with that music than with Porpora: in fact there's a certain degree of discomfort about the way he writes for singers. There are always very long vocal lines that you really have to respect, and he writes so densely that you have no chance to breathe in between phrases: you have to seize any chance you have to take a huge amount of air, because the chances are it’s going to have to last you a very long time! That kind of thing is very technical and you have to master it physically: it's not the kind of music where you can look over the score two weeks before you have to sing it and you'll have it in your voice, it's something that you really have to work on for months to get it into the body.

But more generally, I think that Handel, Hasse, Vinci and Porpora are worlds apart: certainly they tried to copy each other a little bit here and there, but surely that doesn't preclude them having their own agendas, styles and worlds. And to me they each have their own specialities, their own beauty and their own exoticness.

Do you ever get the sense that Porpora reacted against the eighteenth-century tendency to cater to the strengths (and even whims) of star singers by deliberately setting out to challenge them with his writing?

Yes, I do think he challenged them – in a way to underline his dominance both as a singing-teacher and as somebody who wanted to influence the development of opera seria, which indeed he did for a certain period of his life. But that’s assumption, really, because there is only very scant documentation of his private exchanges with people…

On which note, do we have any way of knowing what his teaching-methods were like – either from written accounts or from surviving copies of the exercises he devised or used?

Not quite. There are solfeggi, and there are secondary sources from different castrati (one in particular in Vienna who wrote a treatise on the singing technique of the castrati) from which we can basically reconstruct what life was like in the Neapolitan conservatory, where Porpora was a teacher: when they got up, how many hours they worked, what kind of teaching procedures were in place. But as far as we know there’s absolutely nothing that survives in his own hand explaining his technique or his teaching-methods.

So little of Porpora’s music exists in modern editions: how much archive work and editing was involved, and what was the condition of the manuscripts like?

The manuscripts were actually copies, which were used in Rome for the original performances, so they were really quite tidy! We weren't dealing with handwriting that was completely illegible, like with Bach: provided you’re comfortable with reading the old clefs, you could basically perform straight from scores which date from the time of the premieres without even transcribing them into modern notation.

As well as the sixty-odd operas which he composed, Porpora also leaves an indirect legacy in terms of the music which was written for his two star pupils: Farinelli and Caffarelli. Which of the two singers would you say was the most influential?

Today people know a lot about Farinelli because of the movie [released in 1994 and directed by Gérard Corbiau], but much of the music he inspired honestly wasn't the best in the world: none of the composers that he chose to work with are names that mean much to us today. He never worked with Handel, for instance, and (Porpora excepted) he tended to gravitate towards minor composers like Ariosti and his own brother Riccardo Broschi, whose names come up now and again but didn't produce much that was of great quality. I think that part of the reason why Farinelli was more of a phenomenon [than Caffarelli] during his own lifetime was simply because he looked good: he was a beautiful man, and secondly he had this voice that was incredibly acrobatic. But if you look at the arias which were written for him, there's no compositional depth, because they always left the line open for him to do his own thing. In that sense he was almost like a pop artist, but in terms of musical and artistic value, there wasn't really much behind it – if you look at the literature that exists about him and then compare the music itself, it's quite surprising!

With hindsight Caffarelli was by far the more interesting singer of the two: he collaborated with the really important composers like Handel, Hasse, Porpora and Gluck, so if you look at the repertoire that he inspired and sang it's way better than a lot of what was written for Farinelli. Handel wrote two operas for him, one of which is Serse, and one of which is Faramondo, which I recorded many years ago and is far less well known. And Caffarelli was the star of the original production of Germanico, singing the role of Arminio, which was done by Mary-Ellen Nesi on our recording.

Your colleagues Philippe Jaroussky and Franco Fagioli have both released albums dedicated to Porpora’s arias for Farinelli and Caffarelli respectively – did you make a conscious choice to shine a light on his writing for other singers?

It’s just not my range! Farinelli and Caffarelli were high mezzo-sopranos who spent a lot of time in their upper registers, and that's not me at all. But there were other star singers of my tessitura, for whom some of the greatest roles in eighteenth-century opera were written: Handel composed the title-roles in Giulio Cesare, Tolomeo and Riccardo Primo for Senesino, and Arminio for Domenico Annibali, who also created ‘my’ role in Porpora’s Germanico. I find myself very comfortable in Annibali’s range – I recorded Arminio recently [both for Decca and on DVD/Blu-ray in a production from Karlsruhe, which is out on 13th April], and [the Dresden version of] Hasse’s Siroe which was also composed for him, so I’ve been going through a phase of singing his roles over the last few years!

Finally, you’re doing a lot of directing in addition to your singing work these days: do you have any plans to put Porpora on stage with your production company Parnassus Arts?

I'm constantly staging different works, but for the moment I'm having quite a traditional period! I'm doing Rossini's La donna del lago in April/May and in January 2019 I'm staging Serse (in which I'll also be singing Arsamenes) in Karlsruhe at the Handel Festival. The more exotic operas unfortunately will have to wait..! 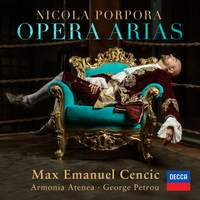 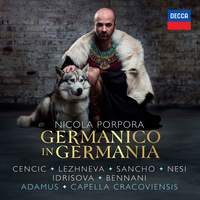