A cross-century collaborative work is due out next week from Robert King and the King’s Consort – and one that offers an unorthodox take on the question of historically-informed performance. Handel’s great Old Testament oratorio Israel in Egypt has captivated audiences ever since its premiere in 1739 – a gripping and well-known myth retold through a wealth of vivid musical scene-painting and impassioned choruses. Mendelssohn was a known aficionado of Handel’s work (indeed, together with his interest in reviving the music of Bach it’s fair to hail him as one of the forerunners of the early music movement as a whole), and it’s not difficult to see where he drew the inspiration for his own Israelite epic Elijah. 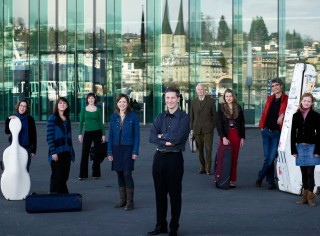 The genesis of this recording is Mendelssohn’s revival of Israel in Egypt for a festival in 1833, for which he added an overture of his own and re-orchestrated Handel’s score. By rights this should be the stuff of nightmares for devotees of musical authenticism such as Robert King, but his aim in this fascinating project is to recreate that very performance in all its anachronistic glory. And he approaches it just as seriously as Paul McCreesh approached his period-instruments Elijah: his musicians play on instruments not from Handel’s time but from Mendelssohn’s, and the other accoutrements of the performance (singing style, ornaments and so on) are similarly nineteenth-century.

The overture sets the tone: pure, undiluted Mendelssohn, seeming to owe a lot to the sound-world of the Hebrides, written only a few years previously. After tenor Benjamin Hulett’s expositional recitative, again delivered in a Romantic style rather than attempting to switch abruptly to a pure baroque idiom, the scene opens with a yearning chorus depicting the suffering of the Israelites – which in its new orchestral clothes sounds as Mendelssohnian as anything in Elijah. Even the recitatives are re-orchestrated: scored for two double-stopping cellos and a double bass, giving a wonderfully characterful if unfamiliar sound which really helps to establish the historical style.

Blockbuster special effects soon follow, as Moses and Aaron face off against the Egyptian wizards with a series of increasingly dramatic miracles – the ever-theatrical Handel must have rubbed his hands with glee at the prospect of depicting the Ten Plagues of Egypt, and the King’s Consort are soon taking on the roles of frogs, flies, locusts and all the rest with audible relish. The chorus depicting the hailstorms is excitingly boisterous, while the hushed representation of the plague of darkness shows the choir at their most sensitive.

Early in the second part (which is devoted to the Israelites’ extended song of praise after the crossing of the Red Sea) the delightful duet “Der Herr ist mein Heiland” allows sopranos Lydia Teuscher and Julia Doyle to shine, before the chorus resumes its vivid scene-painting with a sonorous depiction of the Egyptians’ watery fate. Indeed the hymn of thanksgiving is every bit as varied as the signs and portents of the first half, and Handel’s pictorial inventiveness seems inexhaustible. Alto Hilary Summers deserves special mention for her warm, lyrical aria “Bringe sie hinein”, that provides a beautiful moment of calm before the rousing finale.

The acid test of any project like this isn’t so much whether it’s “authentic” per se; it’s more important for it to be coherent and enjoyable, and Robert King’s performance really does work well as a musical whole. The synthesis of the Baroque and Romantic never feels unnatural – the singing and playing have such conviction and sensitivity that I found myself too busy enjoying the music to care about all the things Mendelssohn does “wrong” in his treatment of Handel. Musical authenticism is at its best when it is a means towards a greater enjoyment of the music; and by putting a novel spin on authenticism, King delivers enjoyment in spades. 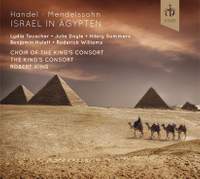