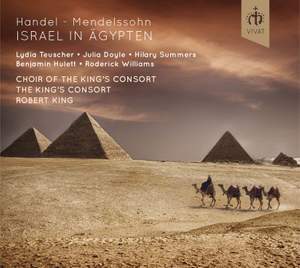 the performance makes a strong case for the piece, even if Mendelssohn's version is unlikely to make a full-scale comeback. The choir is lively, making every word clear, though some of King's... — BBC Music Magazine, May 2016, 4 out of 5 stars More…

David talks to the conductor about his latest reconstruction project, which brings Handel and Mendelssohn together.

Recorded in the splendid acoustic of St Jude’s, Hampstead Garden Suburb, London, where TKC have made more than 65 recordings.

the performance makes a strong case for the piece, even if Mendelssohn's version is unlikely to make a full-scale comeback. The choir is lively, making every word clear, though some of King's conducting feels on the staid side. All the soloists make their mark.

with his vast Handelian experience, King ensures that Handel's mighty series of choral frescoes emerge in all their brilliance and incisiveness, aided by a carefully judged choral-orchestral balance…a vividly realised snapshot of a fascinating historical moment

The acid test of any project like this isn’t so much whether it’s “authentic” per se; it’s more important for it to be coherent and enjoyable, and Robert King’s performance really does work well as a musical whole. The synthesis of the Baroque and Romantic never feels unnatural – the singing and playing have such conviction and sensitivity that I found myself too busy enjoying the music to care about all the things Mendelssohn does “wrong” in his treatment of Handel.

the results are fascinating – burbling clarinets supply continuo, added solo recitatives fill out the sequence of choral movements, and a totally Mendelssohnian overture now kicks off the story. Handel’s masterly depictions of frogs, plagues and other natural disasters in his choruses are enhanced (though with German texts) in this feisty performance.

King’s players conjure up a vivid, lithe soundworld on authentic instruments which is a joy to the ear. Choral and solo contributions (Roderick Williams exceptional even by his own standards) are as impressive as the recorded sound