Argentine pianist Nelson Goerner has a reputation for sensitive, intelligent interpretations of the solo piano repertoire - from Beethoven to Debussy, and focusing particularly on Chopin.

It's no surprise, then, that he was invited to bring his knowledge and expertise to the jury panel of the 2015 Chopin Competition (whose winner Seong-Jin Cho also has a new disc just out).

I spoke to Nelson about the unique experience of judging a musical competition, and about his two forthcoming discs of Beethoven and - of course - Chopin.

You were on the jury panel of this year’s Chopin Competition – what’s it like to be in that position, to have to judge large numbers of other players? Do you try to put yourself in their shoes, or do you try to ignore the player and just consider the music?

I haven’t actually taken part in many jury panels! However I would say that it’s a mixture of many, many things. I feel a great responsibility, of course, as it is all terribly subjective. I try to understand what the player is trying to do, even if that’s not what I have in my mind as a picture of the music.

I try not to judge according to what I think it should sound like, because this is irrelevant in that moment. What’s important, I feel, is the ‘voice’ of the performer – what he/she has to say, and also the potential, because we are judging someone who will hopefully have a career lying ahead of them, so that’s a key thing. If it’s someone with an absolutely personal view of the works he plays and has the equipment to implement his ideas. Someone that you would like to go and hear in a recital, for example.

There are those who would say that competitive music-making is against the spirit of music; after all, this isn’t like sport where there’s an obvious, objective winner, and opinions may differ on what makes the ‘best’ performance. What would you say to those people?"

I have mixed feelings about competitions myself. Very often the procedures are solely by elimination, rather than by strong artist criteria. It is the obligation of each of the jurors to avoid this easy trap. To make it something that could be really special, the fact that you might discover a true personality, a real talent, is the aim we should keep in mind – leaving our egos, our interests, our tastes, far behind. And it’s not that you’re going to give them all the first prize, but it could be sometimes the second-best, or another participant, who gets lots of attention. So it depends on the artistic dimension, really, of the people who have been chosen by the competition. That’s actually why I say that I’m not trying to judge according to what I like myself – on the contrary, I hope to have the openness of mind and spirit that will allow me to go beyond that.

Speaking of Chopin, you’ve made something of a speciality of his music – numerous discs exploring both his popular works and less well-known repertoire such as the Polish songs. Why do you feel such a particular affinity with Chopin?

I have been playing lots of Chopin since I was a kid. And I also entered the Chopin Competition – without success – back in 1995; I was not even in the final. So it takes us back to some of the things you were asking me, about competitions – it definitely doesn’t mean that the prizewinner will be the one who makes a career in the future. So I think it was useful for me. Of course I was disappointed when the results came - I can even remember it now, how I felt. But the main result was, it opened new doors anyway. Because I started playing throughout Poland, and from there it went elsewhere, you know, by word of mouth, which always counts for a lot in music, in general. You go from one concert to the next, and people don’t remember if you’ve been in the final or not – it only matters that you have something to say. So… I have been playing Chopin consistently, very much. Also working in the same way I have done with everything – studying very intensively some works, allowing time for ideas, before playing them in public. And the moment arrives when your intuition, your belief - modest but strong at the same time - tells you that, perhaps, you might be ready to go on stage and play the work…And you have to do it, it is a need , an urgency, to comply to the voice that tells you to do so.

In general, your recordings seem to steer clear of concerto repertoire and focus on solo piano works – your two forthcoming discs, the Chopin Preludes and the Hammerklavier are no exception. Is this your preferred style of music, or might we see some concerto discs on the way in the future?

Well, I think it’s a mixture. Recitals are more difficult – you are alone on the stage, without the complicity of a partner, of an orchestra. To do on your own the final steps that bring you to your instrument can be a harrowing experience. But altogether, I believe only a recital can give a portrait of you as an artist - more so than any concerto. You get a real dimension of the artist. And I’m happy to take the challenge. And those evenings in which you come close to something you were always looking for in a piece without succeeding, communicating to the audience as a sort of medium – will have made all the suffering and the doubts so worthwhile. Those moments are priceless, because of their rarity…

You’ve got another double-billing with Martha Argerich coming up, with whom you’ve played duets and duet arrangements before. What’s it like when two masters of the piano meet and share a stool and instrument?

It’s always been very inspiring for me. Whether it’s Martha or any other artist I really admire. I try to play chamber music concerts as much as I can – it makes you a better musician. When you play with someone else, someone that can sometimes be totally different musically from you, and you have to respond, to complement that person, your horizon widens – for a moment you escape the loneliness of the recital experience, and it is so fulfilling. Very special indeed. For me, playing with an artist like Martha, there’s always a sense of joy more than anything else. Just to see how Martha plays a phrase, for me, is absolutely wonderful.

The Hammerklavier is a prodigiously difficult piece – physically challenging as well as musically complex. How do you approach the scaling of such a musical Everest? Do you have to “train up” your fingers and hands to meet the piece’s demands, like a marathon-runner?

I started studying the Hammerklavier when I was twenty - I will always be grateful to my teacher Maria Tipo; she insisted on approaching such monuments when you are young, creating a solid foundation to which you‘ll return in the future. After having played the sonata for a couple of seasons I dropped it and did not think of it for some years – in the meantime, the process continues, without you being aware of it. Technically speaking, the demands are famously huge, but I never train up my physical apparatus out of the musical content, for the pianistic work is always dictated by it. And, thinking of the sublime Adagio, how immensely difficult it is to sustain, to make the unprecedented depths of this ‘monologue of the soul’ really speak! After that, the colossal and incredibly taxing fugue comes as a liberation from what could be seen as overwhelming raw forces of nature…

Chopin’s Preludes are a very mixed set of miniatures. Do you approach them as individual, separate pieces, or do you see the whole set as a large-scale work?

I have always thought that the major challenge of the Preludes is to give to the cycle its inexorable unity. A unity paradoxically magnified by the diversity of each single prelude. It is hard to think of another Romantic piano cycle of the same degree of psychological complexity. The first one is marked agitato - it is passionate but not ‘heart on sleeve’; the agitation lives in the depths of your soul and it finally subdues, to give a place to the loneliness and anguish of the second; by contrast, the third seems to evoke spring-awakened landscapes – it is in a lighter, happier vein, but the sorrow, the anguish are never far away… while in the last one, it is death that you encounter… a prodigiously powerful journey of the soul, indeed. 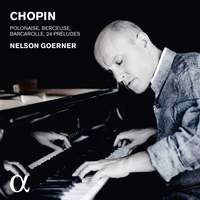 Nelson Goerner's disc of the Chopin Preludes is released this Friday on Alpha; his Beethoven disc (the Hammerklavier & 6 Bagatelles op.126) is due out in March 2016.