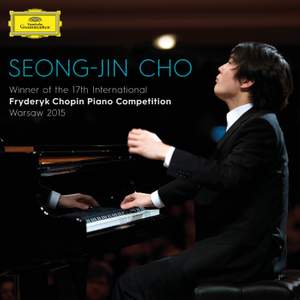 he really is phenomenal: this music seems to flow out of him with such relaxed and elegant perfection — BBC Music Magazine, March 2016, More…

The competition, held every five years, is one of the few in which pianists play pieces by a single composer. 84 pianists aged 16 to 30, from 45 countries, qualified for the 2015 four-stage series of final recitals held over a three-week period in October.

The competition opened on 1 October with a gala concert featuring Martha Argerich and finished with the Grand Finale recitals by the top 10 pianists on 18-20 October. The Chopin Competition is renowned for discovering the world’s most talented pianists. Past winners include Maurizio Pollini, Martha Argerich, Krystian Zimmerman, Yundi Li and Rafał Blechacz.

This all-Chopin disc was made from live performances from the competition's finals.

he really is phenomenal: this music seems to flow out of him with such relaxed and elegant perfection

There's no sense of him rolling up his sleeves for the hard-work part of the programme – Preludes and Sonata seem to be approached on an equal footing, and Cho is clearly no more daunted by the latter's scale than he was by the former's virtuosity...Seong-Jin Cho has certainly made his mark – this is as fine a début as any young artist could wish for. If there's any justice, we should be hearing a lot more from him in the coming years!

His performance of the 24 Preludes Op 28 is ravishing. The wonderfully crisp, unfussy articulation one quickly takes for granted, but the restraint and subtle discrimination of Cho’s playing, combined with his silvery, never fulsome sound, is constantly beguiling.