When my colleague David interviewed Robin Ticciati a year ago regarding his recording of Schumann's symphonies, his responses gave me the impression of a deeply thoughtful musician who takes time to ponder exactly what he wants from every bar. This quality is very much evident in a new disc of three Haydn symphonies with the Scottish Chamber Orchestra. 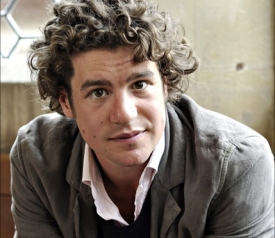 First up is Symphony No. 31, known as the Horn Signal. As you might expect from the nickname, the horns are fairly prominent! Although it wasn’t the first time Haydn had written for a quartet of horns (Symphony No. 13 also has four rather than the usual pair), they are very much in the spotlight here, not least their robust call to attention in the first bar. The use of natural horns adds a piquancy that you can’t really replicate with modern, valved horns. However, they're certainly not blasting all the way through, and Ticciati has clearly thought about when to let them dominate and when they should be more in the background.

He also varies their dynamics on repeats, so whereas a phrase might be played forte the first time round, on the repeat it is heard pianissimo. Speaking of repeats, I should note that Ticciati is fastidious about observing them: not only are first-movement exposition repeats included, but also those normally ignored such as the second halves of movements. The potential danger with this is sheer Haydn fatigue, but luckily this is completely avoided by the inventiveness of Ticciati's interpretation, aided by some tasteful ornamentation. Furthermore, Ticciati makes interesting choices of articulation; for instance, a flute phrase may be tongued the first time but slurred later on.

Although a modern-instrument ensemble, the players apply aspects of period performance practice, not least in the strings, where vibrato is kept to a minimum and used as an expressive device rather than a default position. This is most apparent in the slow movement, which includes a florid solo violin part, played mainly straight by leader Henja Semmler but with vibrato coming into play on long notes. There’s also some wonderful use of fortepiano continuo, subtly improvising along to the strings. It could easily have become annoying, but its sparing and sensitive use is just right, usually in the background but occasionally filling in some semiquavers to great effect: towards the end of the movement where a solo cello joins the violin, it's almost like a miniature piano trio has arrived, or perhaps a smaller-scale version of Beethoven's Triple Concerto. It's a delightful touch that raises this recording to another level of enjoyment.

I must also single out the penultimate, seventh variation of the last movement, which has an extended solo for violone (essentially a double bass viol), these days performed on a double bass. Principal bass Nikita Naumov does a phenomenal job of performing with a Baroque-like, ‘antique’ flavour to his sound.

I’ve spent a lot of time on this symphony, mainly because it displays everything I admire about this disc, but that’s not to imply that the other two symphonies are any less successful. In Symphony No. 70, the addition of trumpets makes for a blazing sound, and the timpani have a pleasing thwack to them. Ticciati’s attention to dynamics is still on display, with the extreme pianissimo of the symphony’s penultimate bars contrasting with the final fortissimo.

The disc concludes with a splendid reading of Symphony No. 101 (one of the London symphonies, also known as The Clock). There are some energetically springy rhythms on offer in the first movement, and some nicely fruity bassoons as they perform their ticking quavers that earn the symphony its nickname. As it happens, all three symphonies are in the same key, and I was worried that I would be a bit fed up with D major by the end of the disc, but luckily this never became an issue. I understand there will be a second release next year featuring some more of the London symphonies, and I can’t wait to hear them! 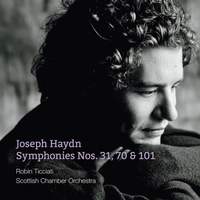