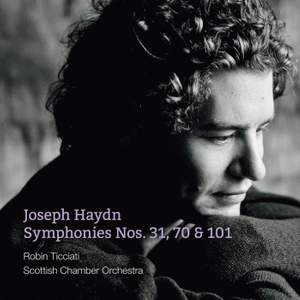 This recording is the first of two which sees Robin Ticciati and the Scottish Chamber Orchestra present an overview of Haydn's symphonic repertoire.Ticciati's approach takes the best elements of authenticity present in period performances, but with the dynamic range, space, colour and life that modern performance practice brings.

Ticciati beautifully highlights the lines,clarity and shape of the music,a skill he brought to bear in his Schumann symphonies recording which garnered several five star reviews and accolades upon release.Always popular with symphony orchestras Haydn has occasionally been treated a little too tidily , but these performances are alive and excitingly fresh.

From Haydn's early period the Baroque influenced Horn Signal has an almost Gothic tinged feel with highly contrapuntal elements.Comparatively, the first of Haydn's famous London Symphonies, The Clock , has its focus firmly on the future.Due for release in 2016, the second recording in the series will include three further London symphonies from Haydn's late period.

Robin Ticciati's recordings have received many accolades: Critics Choice Sound of 2012 (The Independent),Classical CD of the Week (Sunday Times), Disc of the Week (BBC Radio 3 CD Review ), two Top 10 entries in The Sunday Times Best Classical Albums list (2012 & 2014) and Recording of the Month (Gramophone).Robin Ticciati is in his fifth season as Principal Conductor of the Scottish Chamber Orchestra. He began his tenure as Music Director of Glyndebourne Festival Opera in May 2014.

Gramophone named Robin one of the top ten young conductors on the verge of greatness and one of 'Tomorrow's Icons'.Scottish Chamber Orchestra celebrated it fortieth anniversary year in 2014; this is its twenty third recording with Linn.

The performances, though on modern instruments, pay attention to matters of period style - every repeat observed, careful balance between parts…the SCO is everywhere on wonderfully characterful form; its close rapport with the conductor produces music-making [that is] appealingly fresh.

They have a lovely feel for that early, more baroque kind of Haydn. They actually give us what is effectively a three symphony overview… with plenty of punch character and colour. I gather this is volume one – they are going to be releasing three more of the symphonies next year, and on the strength of this first one I’ll definitely be listening.

To compare Haydn's D major moods at the early, middle and late stages of his career, this is a valuable collection, finely recorded and beautifully packaged.

[Ticciati is] a deeply thoughtful musician who takes time to ponder exactly what he wants from every bar. This quality is very much evident in a new disc of three Haydn symphonies with the Scottish Chamber Orchestra...Although a modern-instrument ensemble, the players apply aspects of period performance practice, not least in the strings, where vibrato is kept to a minimum and used as an expressive device rather than a default position.

Ticciati’s decision to programme three symphonies in D major from different stages of Haydn’s career is a clever and attractive one. Of his 104 numbered works in the genre, there is scarcely a dud, but these are all gems...The SCO revel in the brio, dash and pathos of this life enhancing music.

The sprucely animated, vibrantly characterised performances of the Symphony No 31 (The Hornsignal) from the 1760s, No 70 from 1779 and No 101 of 1794 (The Clock) show that there is so much to think about in interpreting a score by Haydn. Fascinating, buoyant, lucid and humane, they prove that Ticciati has got the Scottish Chamber Orchestra just where he wants it.

This generous, well-recorded disc simply fizzles. Wind solos are full of character, string playing is delightfully pointed and the whole enterprise is infused with joy and light. Worth investing in even if you already own other versions of these works.