There are not many harpists who have forged solo careers, yet Xavier de Maistre gave up a lucrative post at the Vienna Philharmonic to do so - surely a brave move for any instrumentalist, but particularly so when the instrument is one with a relatively limited concert repertoire.

Still, any criticism or eyebrow-raising that might have accompanied his move to solo recording must surely have been dispelled by the succession of innovative and popular albums he's since released. The most recent, entitled Moldau, is as the name suggests a celebration of all things Slavic, centred around de Maistre's own arrangement of Smetana's stirring Vltava (whose alternative German title gives the album its name).

As one might expect for a solo harpist, arrangements always feature quite heavily on the menu; I asked Xavier how he approached this task, which seems like it must be equal parts a pleasure and a burden!

There are so many different textures in Vltava, and there are some points where you have obviously taken a slightly freer approach to the music, spreading Smetana’s original held chords into shimmering arpeggios as suits the instrument. Where did the idea first come from to arrange this piece for the harp, and how did you approach the task of reinventing it?

The idea to arrange this piece came because it is all about water and the harp is certainly the best instrument to express all the colours related to springs, waterfalls, nymphs... Of course there some points where I had to take a slightly freer approach because you can't hold chords on the harp so I decided to spread them into shimmering arpeggios in order to fill the resonance. On the other hand other passages were easy to transcribe, like the very beginning which sounds much more even and fluent than with the original flutes!

There are some interesting extended techniques in the Khatchatourian pieces with knocking and tapping on the instrument frame and some very different sounding timbres that one might not expect from the Western orchestral harp. Some might say these are merely superficial gimmicks! What do you think they add to the piece?

These pieces were actually written for the harp and I think that these effects included by Khatchatourian himself are much more than superficial gimmicks. I see the Danse Orientale as a mini Bolero with the same melody repeated again and again always in a different colour as if it was played on a different instrument. Every time I play it in concert people in the audience are stricken and love to discover the wide range of colours which can be achieved on the harp.

At the risk of trying to restrict you to the clichéd and inoffensive sound-world you’re trying to broaden… do you think some of the more forceful pieces (perhaps particularly the famous Dance of the Knights from Prokofiev’s Romeo and Juliet, or indeed the triumphant Vyšehrad section near the end of Vltava) really work on the harp, or do they lose something “in translation”?

Playing more forceful pieces like the famous Dance of the Knights from Prokofiev's Romeo and Juliet is of course a big challenge of the harp. I am always extremely cautious when I choose the repertoire I decide to adapt because it I think it should be not only technically playable but it should always serve the music and maybe bring it into a new light. I have a very broad range of dynamics and expressive colours so it was important for me to include in this recital program some rhythmical striking pieces so the whole album can't be restricted to to the clichéd and inoffensive sound world people might expect from the harp. I use then a different technique with a short direct articulation in order to achieve these sharp powerful sounds needed.

As far as future plans are concerned, can you give us any hints of what lies ahead? Given your affinity for the Slavic temperament and for music from the Slavic nations, might we hear your take on Glière’s mighty Russian concerto some time in the future…?

Glière is one of my favourite concertos and I play it over 20 times this season! I actually come back from an extensive tour with the St Petersburg Philharmonic under Yuri Temirkanov. But in the near future I would like to focus on extending the original harp repertoire with commissions by Penderecki and Kaja Sariaaho and rediscovering concertos of the eighteenth century. I am thinking of playing them on a period instrument for the first time in my life in order to highlight this forgotten repertoire! 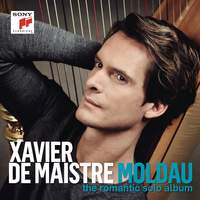 Other discs by Xavier de Maistre 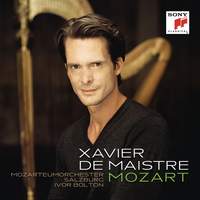 The harpist's first Mozart recording, including the Concerto for Flute & Harp K299, and arrangements of the Piano Concerto No. 19 and the ever-popular Sonata in C K545.

A recital centred around the musical heritage of Venice, featuring arrangements of Vivaldi favourites and more. '[A] superb display of harp-playing at its best' (BBC Music Magazine). 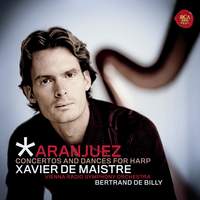 No harpist's repertoire would be complete without Rodrigo's own arrangement for harp of his evergreen Concierto de Aranjuez, here the cornerstone of an Iberian-flavoured programme that includes Ginastera's concerto and Tárrega's Recuerdos de la Alhambra. 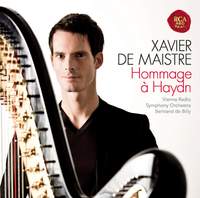 Arrangements of Haydn's keyboard works for harp, including his concertos Nos. 4 & 11, as well as Grandjany's Fantasy on a Theme of Haydn.

The piano music of Debussy seems just as suited to the harp, as this programme shows - featuring de Maistre's arrangement of the Suite Bergamasque and two songs with Diana Damrau.