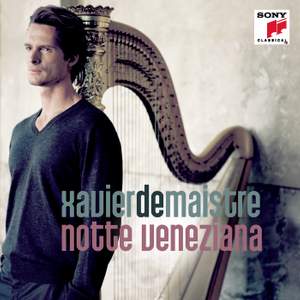 This is a superb display of harp-playing at its best. At one extreme, the so-called 'Albinoni Adagio'...displays astonishingly warm harp tone, fingers barely caressing strings - indulgently sentimental... — BBC Music Magazine, September 2012, 5 out of 5 stars More…

Marcello, A: Oboe Concerto in D Minor, Arr. for Harp and Strings

“A selection of wonderful Baroque concerti by Venetian composers, like Marcello, Albinoni and Vivaldi – arranged for my instrument. In his famous “Winter” from The Four Seasons, the glass-like sounds of the harp create an ethereal mood astonishingly reproducing snowflakes and splintering icicles. So all these fantastic pieces which everyone knows suddenly seem fresh and new, and can be rediscovered thanks to the very special sound of the harp.” Xavier de Maistre

Xavier de Maistre is generally fêted as the artist who has managed to liberate the harp from its reputation for wonderful but very soft sounds, and establish it as a solo instrument in the concert hall.

On his new album "Notte Veneziana", the internationally successful harp virtuoso plays well-known concertos by the Venetian composers Vivaldi, Marcello and Albinoni in new arrangements, combining them with original compositions for solo harp such as the sonata by Giovanni Pescetti, Godefroid’s stunning set of variations on the popular tune “Carnaval de Venise”, and “La Mandoline” by 19th-century composer Elias Parish Alvars.

Xavier de Maistre's aim is to make the listener forget completely that most of the Baroque concertos heard here were not originally written for the harp, but for different melody instruments. He finds it fascinating to bring out new timbres in the arrangements, some of which he pens himself. Vivaldi's famous concerto "Winter", in particular, seems to him to be predestined for playing on the harp, and his interpretation does indeed present this often-heard work in a totally new guise.

“Xavier de Maistre is a virtuoso of the highest order, profoundly musical and capable of realizing a remarkable range of nuance.” (Gramophone)

This is a superb display of harp-playing at its best. At one extreme, the so-called 'Albinoni Adagio'...displays astonishingly warm harp tone, fingers barely caressing strings - indulgently sentimental and pure magic.

This is a delightful collection. Xavier Maistre plays the harp with infinite finesse and much delicacy of colour. He offers four Vivaldi concertos and makes them sound as if they were actually written for the harp, with slow movements particularly enticing...the appeal of the performance rests as much on delicate simplicity as extrovert bravura.