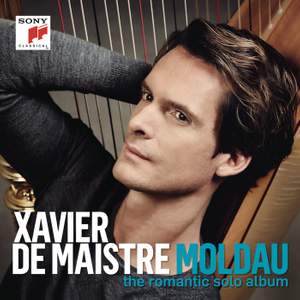 De Maistre is a kind of Hamelin of the harp: the agility, the ease with which the most astonishing technical challenges are surmounted, the conversational phrasing and evenness of rapid passagework... — Gramophone Magazine, July 2015 More…

Tchaikovsky: The Nutcracker: Dance of the Sugar Plum Fairy

David talks to the harpist about his new disc, Moldau, featuring Slavic-flavoured arrangements and compositions for the harp.

Xavier de Maistre is generally celebrated as the artist who has managed to liberate the harp from its reputation for wonderful and very soft sounds, and establish it as a solo instrument in the concert hall. His new album ‘Moldau: The Romantic Solo Album’ is a result from the classical world calling for an album of pieces for solo harp.

‘Moldau: The Romantic Solo Album’ contains some of the most beautiful and well-known pieces from Russia and Bohemia, including Xavier de Maistre's sought-after encore The Moldau from Má vlast and excerpts of the famous ballets by Tchaikovsky (The Nutcracker) and Prokofiev (Romeo and Juliet).

“This was a natural choice of works since the Slav soul is a part of my musical world. In spite of – or precisely because of – the fact that opposites attract, Slav excess and effusiveness seem to be the very antithesis of the restraint and Cartesian ideals of my French roots” says Xavier de Maistre. “It is not easy to define Slavism in music, but one constant feature is the dominant inspiration that has come from folk music. The Slav melodic genius has few equivalents elsewhere and is something that I have always found overwhelming. The list of great composers that I have dreamt of bringing back to life in order to ask them to write for my instrument is a long one, but at the top of it I would place Prokofiev and Tchaikovsky, since their musical language has always struck me as likely to revolutionize writing for the harp.”

No one could have imagined what to expect - even Xavier de Maistre himself - when he challenged himself to change the face of the solo harp 16 years ago. Today he has gained reputation as one of the most extraordinary musicians of this generation. He performs works with breathtaking precision, presenting masterful arrangements of works that are usually played by an entire orchestra. The interpretation of these works, that few harpists before him have even considered playing, has contributed to his reputation as one of the most creative and extraordinary musicians of his generation.

Xavier de Maistre began to study harp at the age of nine. He then studied with Vassilia Briano at the Toulon Conservatory, be-fore perfecting his technique with Catherine Michel and Jacqueline Borot in Paris. In 1998 he was awarded the first prize and two interpretation prizes at the prestigious USA International Harp Competition. Later that same year he went on to join the prestigious Vienna Philharmonic Orchestra – a position which he left in summer 2010 in order to devote himself to his international solo career. Since 2001 Xavier de Maistre has taught at the Hamburg Academy of Music. He also gives regular master classes at New York’s Juilliard School, Tokyo’s Toho University and London’s Trinity College.

De Maistre is a kind of Hamelin of the harp: the agility, the ease with which the most astonishing technical challenges are surmounted, the conversational phrasing and evenness of rapid passagework instantly amaze. But it is also his depth of tone and variety of colour that beguile.