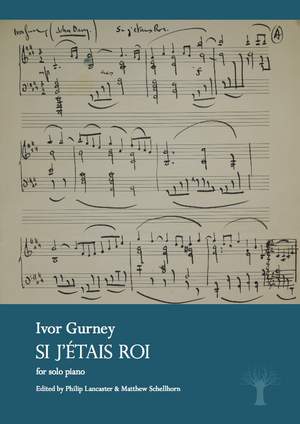 Si j’étais Roi is remarkable for being the final known and extant work by Ivor Gurney. It was composed in January 1927, in the confines of the City of London Mental Hospital, Dartford, where he had been incarcerated since the autumn of 1922. Many of Gurney’s late papers were destroyed out of well-intentioned but ultimately misguided concern for his posthumous reputation – writings deemed at a glance to be the product of illness and mania rather than of a serious questing artist. And yet the work that has survived proves that Gurney did not sink into incoherence.

In early 1927 Gurney wrote that it was becoming too painful to continue writing music and poetry, and whether because he stopped writing at this time or because anything that may have been written after this time has been lost or destroyed, Si j’étais Roi must be regarded as his final work.

Although known predominantly in music for his songs, Gurney composed numerous works for solo piano, most notably his several piano preludes, some of which were published during his lifetime and nearly all of which have since been published and recorded.

This new score of Gurney’s final work has been co-edited by Gurney scholar Philip Lancaster and pianist Matthew Schellhorn.