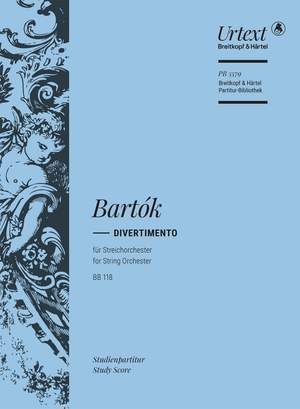 In the summer of 1939, Béla Bartók traveled to Switzerland to compose the "Divertimento for String Orchestra" within the two weeks in which he enjoyed the hospitality of his patron Paul Sacher. Inspired by the convivial atmosphere there, he felt like an "old-world musician." The Divertimento is Bartók's highly original contribution to this traditionally entertaining genre of music. The title and three-part structure with two dance-like, vital outer movements allude to Mozart's time, whereas the cheerful alternation between solo group and tutti in the final movement tie up with the Baroque concerto grosso principle. Only the burnished glow of the middle movement suggests that Bartók found little of comfort in the world of his time just a few days before the outbreak of World War II.

The "Breitkopf Urtext" edition is based on Bartók' autograph and the first edition of the score, which he meticulously revised. Subsequent emendations noted by Bartók in his personal copy were taken into account.