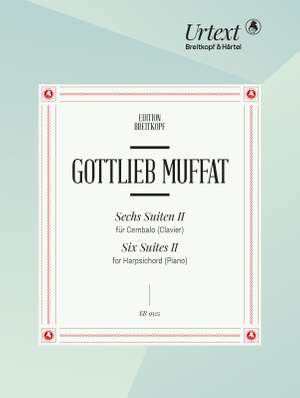 In 2018 Breitkopf & Härtel published a first edition of six previously unknown suites by the most important Viennese keyboard composer of the early 18th century, Gottlieb Muffat (EB 8904). They were recently rediscovered in Kiev – where the Red Army had transferred the archive of the venerable Berlin Sing-Akademie after World War II – and returned to Germany by the Ukrainian government.

Now editor Glen Wilson presents a second set of six suites from the same archive, all but one of which are also handed down as unique, reliable sources. This new collection maintains the same high musical level and the same luxuriant ornamentation as the first, while adding another dimension to the immensely varied mixture of styles which this great composer conjured up out of his rich imagination. A must for everyone interested in keyboard music of the Baroque era!