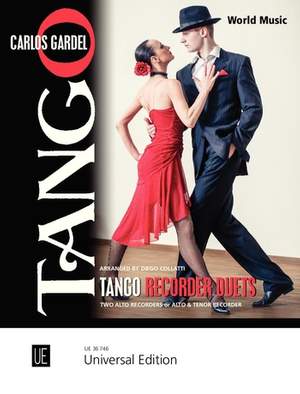 The name of Carlos Gardel is synonymous with the Tango; his compositions in the genre have long been considered classics. Universal Edition’s popular series of arrangements by Diego Collatti is expanded by this new edition for two recorders, expertly edited by the Austrian virtuoso, Thomas List. They can be played on two alto recorders, or alto and tenor, and are for intermediate to advanced players. Recorders might seem an unlikely voicing for this music but, on the contrary, Collatti believes they are exceptionally well suited to reflecting the glamour and fascination of the tango. Indeed, they could evoke the sound of the South American panpipes, not too far removed from the Argentinean heritage of the tango. These arrangements will also help introduce students to new elements of tone production and rhythm, while they enjoy the sheer vitality of the tango.