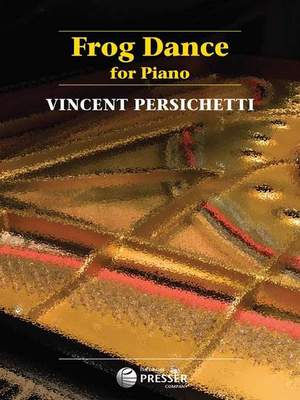 The complete listings of Vincent Persichetti's works include several compositions that were withdrawn and have remained known secrets. Not mentioned anywhere however, is this brief gem, a family heirloom revealed by the composer's daughter in 2015. Lauren Persichetti has written: My father used to play Frog Dance for me to dance to when I was a little girl. He also played it to warm up before practicing for four-hand concerts with my mother. As I got older, I asked him to write it down, but he said it was just something he had written when he was a little boy. Finally, after much persuasion, he gave a copy to me and my husband, Howard Harris, for Christmas in 1977. I can still hear him play and I still dance to it.