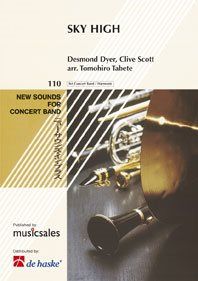 In 1966, the British singer-songwriters Des Dyer and Clive Scott founded the pop group Jigsaw. Nine years later they enjoyed their first great success with the catchy song Sky High which rode high in the charts in many countries throughout the world. The Japanese arranger Tomohiro Tabete has composed this exciting version for concert band.