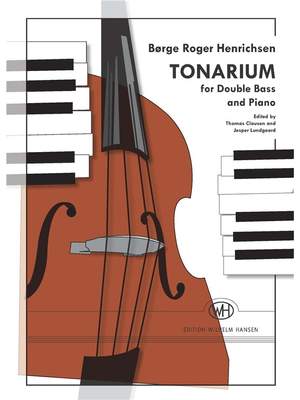 A TONARY (Lat. tonarium) is defined as a liturgical book
of the Western Christian Church containing various chants which
is organized according to the eight psalm tones of Gregorian
chant.

With that in mind and in the spirit of J.S. Bach’s ‘Das
Wohltemperierte Klavier’ and his penchant for Duke Ellington’s
and Jimmy Blanton’s legendary duets for piano and double bass
from the early 1940’s, Børge Roger Henrichsen in 1982 startedhis ‘Tonarium’ which contains of 20 preludes and fugues in his own personal swing style. ‘Tonarium’ became his last major work.

BØRGE ROGER HENRICHSEN (1915-1989) was a Danish
pianist and composer. He studied classical piano and played
jazz with Svend Asmussen and others from 1937.
From 1950 he became director of jazz programs for DR
(Danish Broadcasting Corporation), a position he held until
1980. He also published several volumes of jazz studies for piano.
In short terms it’s hard to overestimate Henrichsen’s effect on jazz.