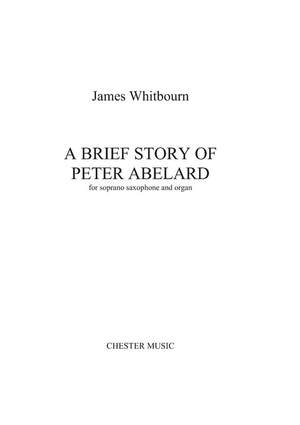 For Soprano Saxophone and Organ accompaniment.

'Peter Abelard was a medieval philosopher, poet and musician, born in France in 1079. He taught at Notre Dame Cathedral in Paris, lodging with Canon Fulbert, whoadmiredhiswork. In time, he also became tutor to Fulbert's beautiful seventeen-yearoldniece, Helo se.

Abelard and Helo se began a passionate love affair (Dance of Peter and Helo se),which resulted in a son, Astrolabe.

Forthesake of Abelard's position, they married secretly, and Canon Fulbert waspresent at their marriage. But Fulbert later reacted furiously to news that Abelard hadsent Helo se to a convent, believing that he had abandoned herinfavour of his owncareer. In revenge, he had Abelard castrated (Revenge of Canon Fulbert).

After his mutilation, Abelard became a monk, and he and Helo se remained constantcorrespondents for the remainder of his life.Hecomposed a hymnbook for Helo se,who by then was Abbess of the convent of the Paraclete. Among the hymns was avisionary poem of the New Jerusalem, set to a beautiful melody in the Dorian mode,O Quanta Qualia.

Peter Abelard documented much of his own story in a number of writings, includingthe Historia Calamitatum Mearum (The story ofmytroubles).'