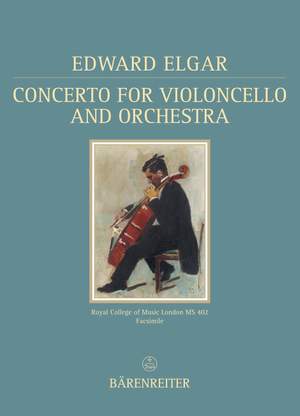 Perhaps it was British humour which led Elgar to describe his Cello Concerto, a work composed in the autumn of his life, as “good and lively”. Premiered on 27 October 1919 in London, the work is an expression of his personal experiences as well as those encountered as a composer together with echoes of earlier compositions such as the Serenade for Strings. When asked what significance the Cello Concerto had, Elgar replied: “a person’s attitude to life”. Today it is one of the most popular works in the cello repertoire.

This facsimile was published for the occasion of the 150th anniversary of Elgar’s birth on 2 June 2007. True to the original, it reproduces Elgar’s numerous coloured corrections and additions; preparations for the printed version of the score and last minute corrections, no doubt reflecting his experience in rehearsals, performances and recordings. The edition also includes an introduction by Jonathan Del Mar who has already prepared the Urtext edition of this work as well as a preface by the renowned cellist Steven Isserlis .