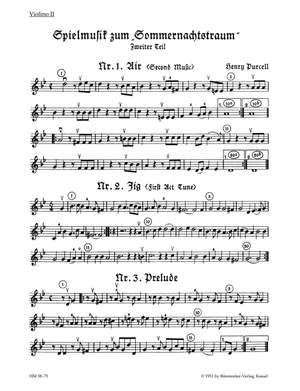 In completion of the first part (Hortus Musicus 50 now out of print) this second part to the 'Music To The Midsummer Night's Dream' contains all the remaining four-part instrumental pieces from Henry Purcell's opera 'The Fairy Queen' (1692). Similar to the pieces in the first part the composer wrote them for performance by Strings, but they can also be played by Wind Instruments only (in particular wood-wind) or with string and wind instruments mixed, and also with one or several instruments to a part. The pieces were put in such an order that they again present a small self-contained suite.

The titles to the several numbers which arepartly mentioned more exactly in this book indicate their place in the above named opera by Purcell. They elucidate at the same time the character of the various pieces. Thus No.1, Air (Second Music) is originally a (second) introductory piece of music for the opera which still precedes the actual Overture. No.2, Jig, No.5, Air, and No.8, Air, are instrumental postludes to the first, fourth and second acts of the opera respectively, whereas No.4 'Dance for the Followers of Night', No.6 'Dance for the Green Men' and No.7 'Monkeys' Dance' present a motley picture of the operatic construction which provided a great number of allegoric persons and figures.

From a purely musical point of view, this second part too of the 'Music To The Midsummer Night's Dream' contains gems of old instrumental music. May this present book help to gain new friends for the noble art of the great Old-English composer.