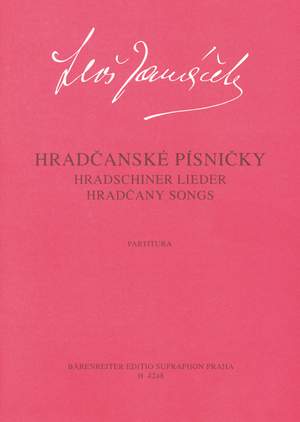 The first two months of 1916, during wartime, was the only period during which Janacek wrote for female voices alone, thus responding to thesituation of the time when the majority of men had to leave to fight in the war. For the recently established Moravian Female Teachers' Choral Association he wrote, among others, settings of three patriotic poems by FrantisekSerafin Prochazka: Golden Lane (Zlata ulicka), The Weeping Fountain (Placici fontana) and Belvedere(Belveder). They were published under the title Hradcany Songs. The score contains a preface in three languages(Cz./Ger./Eng.).