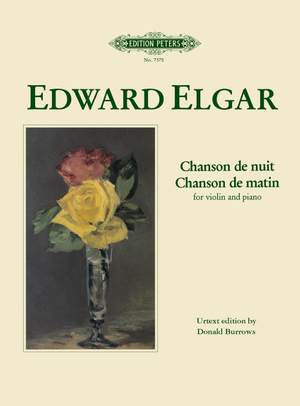 In the earlier part of Elgar's career as a composer, he wrote several short pieces which became very popular. Chanson de Nuit and Chanson de Matin both carried his name far and wide before he composed his larger orchestral works. These two pieces, which, together, complete Op.15, were published in several versions at once: for string orchestra, for small orchestra, for violin and piano and so on - so it is almost impossible to say, with any degree of certainty, which was the original version. However Elgar himself was a good violinist and so it may well be that he would have played this tune through to himself on the violin, before adding a piano part andsending it off to his publishers for their consideration. In any event, it remains a beautiful theme of considerable character and style.

This Urtext edition provides you with an accurate representation of the composer’s original intentions and thoroughly detailed editorial marking and suggestions, with commentary, as edited by Donald Burrows.

This is the version for Solo Violin with Piano Accompaniment. The solo violin part is also included on a separate insert.