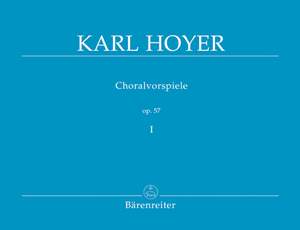 Karl Hoyer (1891–1936), a highly regarded student of Max Reger and Karl Straube, the Kantor at St. Thomas’s, Leipzig, held several positions, including that of professor at the famous Institute for Church Music in Leipzig. For a long time his Chorale Preludes, Op. 57 were only available in libraries or second hand shops, but now Bärenreiter has published a complete edition of them.

These pieces are characterised by formal variety, brevity for practical purposes, and are mostly modest in their technical demands.

They were extremely well-known during Hoyer’s lifetime, a period which marked the transition from late Romanticism to that of the German Organ Movement of the 1920s. The first volume contains chorale preludes for the entire church year, arranged into sections for Christmas and Easter, Trinity and the end of the church year. In comparison with the first edition, the keys correspond with those in the Evangelisches Gesangbuch and Gotteslob [Protestant and Catholic hymnbooks]. Three further volumes are in preparation.