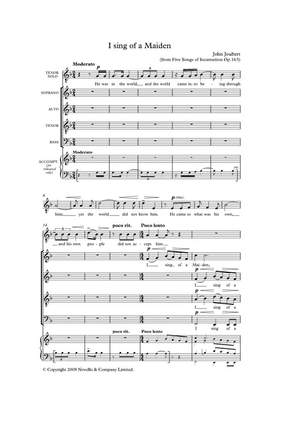 Five Songs of Incarnation is planned to be performed as a cycle in celebration of the Nativity. Each song is prefaced by quotations from the first chapter of St. John's Gospel set for tenor solo and SATBunaccompanied.

Although the work is designed as a single entity to be performed without a break, individual songs may be performed separately, with or without their respective preface. Four of the songs are reworkings ofcarols from the composer's earlier Five Carols for Five Voices, Op. 78. The central song, I Sing of a Maiden, is new, as are the prefaces for tenor solo.