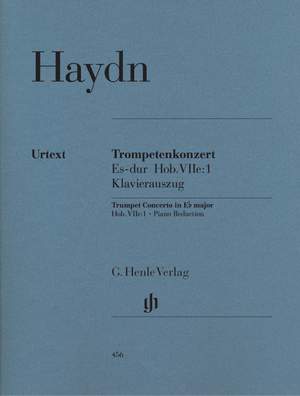 At the end of the 18th century, the Viennese court trumpeter Anton Weidinger (1767–1852) invented the “Klappentrompete” [keyed trumpet], which allowed the trumpet to play the octave in chromatic (half-step) steps. Thus in 1796 Joseph Haydn composed his Trumpet Concerto in E-flat major Hob. Vlle:1, which numbers today among the major standard works of its genre, especially for Weidinger. Contemporaries described the tone of the Klappentrompete as soft and delicate, and perhaps this is why Haydn placed more value on lyrical themes than on brilliance in this concerto. For performances today a B flat trumpet or even a flugelhorn may be a better choice than an E flat trumpet. Themusic text of our edition is based on that of the Haydn Complete Edition, which G. Henle also publishes.