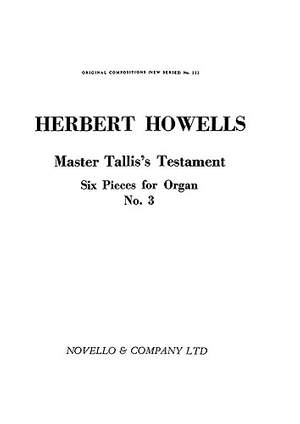 Master Tallis's Testament No.3 from Six Pieces for Organ. Composed in 1940, Master Tallis's Testament unfolds Quasi lento, teneramente in a gentle six-eight rhythm and in G minor. It consists of three variants of a theme whichfalls into three phrases (eight plus six plus four bars). The music rises gradually to a climax at the end of the third variant. A quiet echo of the last two bars supplies a coda and a peaceful ending in the major. The piece isone which its composer regards as most typical and with particular affection. Its title, which pays tribute to a father of English cathedral music, allies it to the twenty-four pieces contained in Howells' two sets ofclavichordpieces, the twelve of Lambert's Clavichord (the Lambert not being the composer Constant, but the Bath photographer Herbert who, in the Twenties, published a set of portraits of British composers (including Howells) andthe twelve of Howells' Clavichord (1951), the separate titles similarly evoke those of the Elizabethan Virginalists.
© 1977 Felix Aprahamian