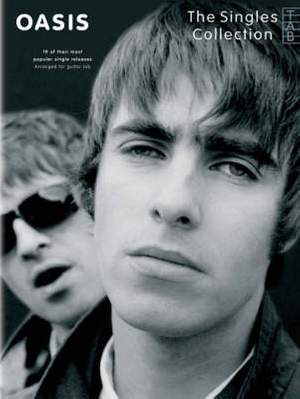 It is no secret that the singles released by Oasis since the mid-1990s were responsible for a universally rejuvenated interest in the British rock tradition. Shining with confidence, swagger, attitude and rich in that specialworking-class optimism that has characterised the greatest British bands through the years, the Oasis singles made guitar rock relevant for a new generation of young hopefuls. The Blur-vs-Oasis race to the No.1 slot in 1995 hassince become regarded as the epitome of the 'Britpop' phenomenon, demonstrating the cultural power a simple pop single can adopt in the eyes of its audience.

This specially compiled collection celebrates the very bestsingles by this important band, all presented in accurate Guitar Tab with full melody line and lyrics.