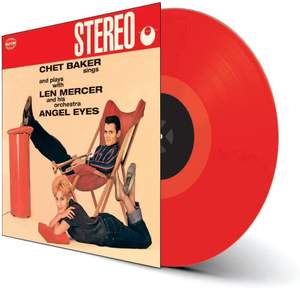 WAXTIME IN COLOR CHET BAKER: ANGEL EYES Limited Edition 180gram coloured vinyl (ORANGE) with its own unique sticker Originally issued in Italy as "Angel Eyes" and in the US as "Chet Baker with Fifty Italian Strings", this LP was made by Chet Baker in Milan during his second tour of Italy in 1959. Backed by a big band conducted by Len Mercer (the artistic name of the Milanese conductor Ezio Leoni) in a selection of well-known standards, including a new reading of the classic Baker hit, My Funny Valentine. CHET BAKER, trumpet & vocals on all tracks with the Len Mercers Orchestra: Recorded at Gurtler Bros. Studio, Milan, Italy, September 28, 1959