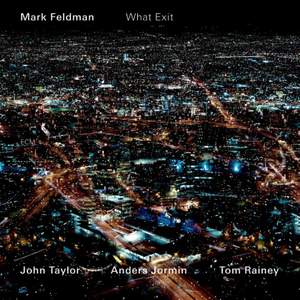 Strong material demonstrates Feldman's versatility, his ability to create an effective synthesis of 'jazz' and 'chamber music' in his playing. This combination of players, chosen by Feldman and producer Manfred Eicher, had never worked together as a quartet previously and the performances have the freshness of discovery. Bassist Anders Jormin, Swedish veteran of the bands and ECM recordings of Bobo Stenson, Tomasz Stanko and Charles Lloyd, and Californian drummer Tom Rainey, making his ECM debut, form a very powerful, driving rhythm team. English pianist John Taylor, in his first ECM appearance in four years, plays with resourcefulness and the expected astute choice of notes.

And Feldman really flies - touching on all options from Bach to swing to free improvising, sometimes in the space of a single solo. On 'What Exit' much of the emphasis is on interplay, and all four of the quartet members make significant contributions.