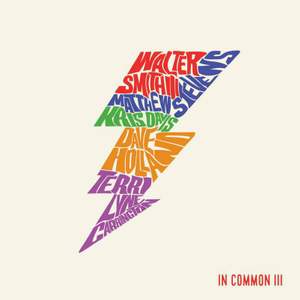 The textures that the members of the group produce, both on their own account and as contributions to the band’s collective sound, are as beautiful and satisfying as their melodic and harmonic... — BBC Music Magazine, June 2022, 5 out of 5 stars More…

Walter Smith III and Matthew Stevens are two musicians at the forefront of developments in jazz and improvised music, listing the likes of Terence Blanchard, Ambrose Akinmusire, Esperanza Spalding and Christian Scott as collaborators. The pair started working together in 2017, and four years later, they're back for the third iteration of their highly commended In Common project. Previous guests include Nate Smith, Linda May Han Oh and Marcus Gilmore; on 'In Common 3', Kris Davis takes the piano chair vacated by Micah Thomas, and completing the lineup are two legends of the game - Dave Holland and Terri Lyne Carrington.

What's new, third time around? "It's longer, freer, and yet more spontaneous," says Smith. The successful In Common formula - inventive 'one-page songs' written with specific musicians in mind - disguises the through-line that uniquely shapes this record: "The spotlight is on the community of musicians as a whole," Smith comments. "The general vibe is sculpted by the musicians' interpretations of what we bring in." Davis' influential presence means the project leans into the aesthetics of free improvisation for the first time; the resulting soundworld lends itself to electronic manipulation, another first for the series. The span of fifteen tracks showcases the duo's knack for reinvention, slipping into unfamiliar contexts without losing sight of the album's focused essence.

Smith is keen to emphasise the standalone nature of the divergent In Common recordings. Some aspects carry through though, like their commitment to remembering lost influences - opener 'Shine' serves as both a thank you and an acknowledgement to McCoy Tyner, Wallace Roney, Chick Corea, Jimmy Health and Ellis Marsalis. That introduces the remaining fourteen tracks, that divide nearly exactly into spontaneously constructed ideas that introduce fully composed tracks.

"In Common is in the business of taking risks...Discovering the sparks that occur when putting musicians in a room together to record an impromptu set of original material." - **** Jazzwise

A truly exceptional addition to Whirlwind's catalogue of adventurous albums by international artists made much the more enjoyable by the leader's mischievous sense of humour that can be experienced as much on the album's cover as in the music." - London Jazz News

"In Common III is far from a casual blowing date designed to show off the players' chops. With their shifting textures and compositional variety, the tracks show the ways - in this case mostly gentle and lyrical - five musicians can fruitfully interact." - The Arts Fuse

"The pervasive vibe is playful and relaxed, that of five empathetic intergenerational master-musicians having fun while gently pushing the envelope." - All About Jazz

"A sterling example of interplay and individual improvisations." - Glide Magazine

"Full of ideas and themes...Dynamically varied in pitch, tone, and texture. Some tracks have the feel of a vignette, others of a fully formed picture." - SimplyJazzTalk

"The album wends down multiple stylistic paths over the course if its fifteen-track run. Yet while there's abundant diversity, the omnipresence of the co-leaders ensures a sense of unity is preserved." - Textura "Turning the dials on a rich musical kaleidoscope." - Jazz Weekly "One of the most absorbing jazz releases of the year so far." - Marlbank

The textures that the members of the group produce, both on their own account and as contributions to the band’s collective sound, are as beautiful and satisfying as their melodic and harmonic ideas are beguiling.