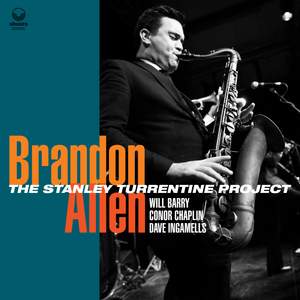 Andre Previn, Dory Previn: You're Gonna Hear from Me

Ray Charles, Duke Pearson: What Could I Do Without You

Lennon & McCartney: The Fool on the Hill

Brandon has established himself as one of the UK’s most in-demand saxophonists and bandleaders. He has performed extensively throughout the UK, Europe, the Middle East, Asia and Australia, both as a leader and sideman. Throughout his career he has worked with top international artists including Eric Clapton, Paloma Faith, Kyle Eastwood, Tony Lakatos, Adam Nussbaum, Gary Husband, Stefano Di Battista, US3, The Blockheads and many others. The Stanley Turrentine Project came about because of a deep admiration and respect for the late, great saxophonist’s musical approach and output. Brandon’s highly acclaimed Gene Ammons Project came into existence for the same reasons. Selections from Ammons’ entire catalogue were reinterpreted, seeking to capture the spirit of the music as well as exploring the stylistic changes that occurred throughout the tenor saxophonist’s 30-year career.

The repertoire of The Stanley Turrentine Project is slightly more specific, drawing from Turrentine’s releases on the Blue Note and CTI labels. In addition, some of Turrentine’s renditions of rock & pop hits of the 60s and 70s have been reimagined by Brandon and the quartet. Brandon explains: “When putting this project together I deliberated over the choice of tunes for some time. Listening to as many albums as I could, discovering some gems along the way, I slowly began to pick out some selections that resonated with me and that would work well with this line-up. I then began to arrange them for the quartet. “Some of the original versions were orchestral in nature and so I tried to capture the essence of that large ensemble feeling. With the other tracks I have taken all the main elements of the song but have made some small alterations, textural changes here and there and opened up certain sections for solos.”

Brandon shares his thoughts on the project, “This is very much a labour of love. My deep respect for Stanley Turrentine’s music has guided me in putting together these arrangements and in my selection of what I believe is my strongest band to date. I believe that we’ve captured some of the ‘spirit’ of the music and I can’t wait to share this album with the world.” For his band, Brandon carefully selected some of London’s finest to join him on the project, including Will Barry (piano & keys), Conor Chaplin (acoustic & electric bases) And Dave Ingamells (drums).