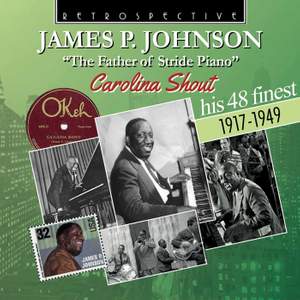 James Price Johnson was the greatest pianist of the Harlem ‘stride’ school, a style he virtually invented. His early playing had an almost orchestral approach to the keyboard, showing ragtime, blues and classical influences within a muscular, percussive ‘stride’ sound. He taught Fats Waller and influenced Duke Ellington; in fact, he is only equalled by Earl Hines and Art Tatum as the supreme pianist in jazz history. Retrospective’s Carolina Shout (the title of his most famous piano composition) offers a rounded portrait on two well-filled CDs of the 'Father of Stride Piano', from examples of his piano rolls and pre-electrical recordings through to a late outing with Sidney Bechet in 1949, September Song. There are 17 scintillating solos from Snowy Morning Blues to his magnificent Liza of 1945. He is a sensitive accompanist to Bessie Smith and Ethel Waters among others. There are half a dozen wonderful trios and quartets, including those with clarinettists Omer Simeon and Rod Cless. Then a full score of great band items features a host of top jazz names, among them Henry 'Red' Allen, Vic Dickenson, Edmond Hall and Max Kaminsky. Johnson was also a fine composer, writing no fewer than 23 of the numbers on Carolina Shout. These include such familiar hits as The Charleston, If I Could Be With You One Hour Tonight and Old-Fashioned Love. In fact, the whole exuberant collection vividly demonstrates that James P. Johnson’s pivotal role in jazz history is joyfully beyond question.