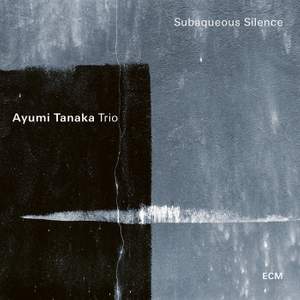 Subaqueous Silence, pianist Ayumi Tanaka's leader debut for ECM - following critically acclaimed releases with Thomas Stronen (Lucus, Bayou) - is a strikingly original statement. Tanaka met bassist Christian Meaas Svendsen and drummer Per Oddvar Johansen shortly after arriving in Oslo a decade ago and they have been developing their musical language together, exploring the implications of Ayumi's compositions.

Deep interest in the work of Norwegian improvisers prompted Tanaka's move to the West, but she also speaks of a growing awareness of her own cultural roots; there is an ascetic rigour in her playing, as well as a sense of space suggesting affinities with Japanese classical music.

Ayumi views the trio as "more like a chamber ensemble. We share a flow of energy, even in silence." Per Oddvar Johansen's subtle drumming has previously distinguished recordings with Trygve Seim, Christian Wallumrød and others. Christian Meaas Svendsen makes his first ECM appearance on Subaqueous Silence; his intensely expressive arco bass on "Black Rain" is among the album's highlights.