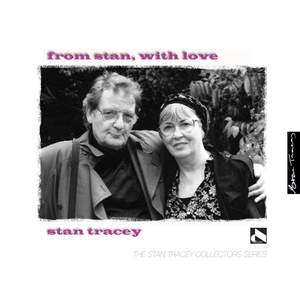 New, From Stan, with Love: With Love from Jazz / We Love You Madly

Stan Tracey: Sweet Used to Be

Stan Tracey: Amoroso, Only More So

Ellington: Blues with a Feeling

Ellington: I let a song go out of my heart

Stan Tracey: We Love You Madly

The second release in the Stan Tracey Collectors Series of remastered reissues, focussing on archival titles from The Godfather of British Jazz rich catalogue of recordings.

These two albums were made in October 1967 and August 1968. The earlier one, 'With Love From Jazz', is the last 1960s recording by Stan Tracey's quartet with tenor saxophonist Bobby Wellins. Not quite a follow up to 'Under Milk Wood', it was made two years later and marked a critical change of Stan's personnel. The second album, 'We Love You Madly', is one of several Tracey big band sessions between May 1968 and October 1969, and as its name suggests (using the Ducal phrase addressed to audiences everywhere) it is a collection of Ellingtonian material, plus Stan's affectionate tribute in the title track. Recorded to celebrate the Duke's 70th birthday, it showcases musicians from the producer's stable - Don Rendell, Ian Carr, Acker Bilk, Joe Harriott & Tony Coe - who each have a feature from the Ellington repertoire.