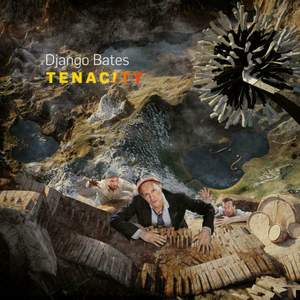 Django Bates brings together his Belovèd Trio with the Norrbotten Big Band for a technicolour romp through the Charlie Parker tunes that have inspired Bates throughout his career, making a fitting way to celebrate significant birthday markers for both.

2020 brings revered British composer, pianist and educator Django Bates' 60th birthday and his 40th year as a performing musician, and it also marks the 100th anniversary of jazz saxophonist Charlie Parker's birth. So what better way to celebrate than with the release of studio album 'Tenacity', fresh from the Arctic Circle, featuring The Norrbotten big band and Django's piano trio, Belovd.

This 53 minute ten-track album features four new Parker orchestrations, plus Laura, a film noir favourite of Parker's, and an expressionistic reworking of Star Eyes. Alongside these are four Bates' originals which push the possibilities of the big band to new levels of virtuosity. In the spirit of George Martin, a full range of studio techniques were employed to create a progressive new big band sound.

The album artwork is stunningly surreal. Featuring Nick White's photographic work, the cover shot took a year to compose and fine-tune. In a download world, a physical album needs to be really special in both its presentation and its recording quality to fully engage the listener. That is Tenacity!

"Charlie Parker's music is given a new lease of orchestral life that amounts to something other than orchestral bebop, particularly on "Donna Lee "where the theme is skillfully spread over a tempo that is more relaxed than Birds high flying moments." - **** Jazzwise (Editor's Choice)

"Tenacity does a fine job of reimagining Parker tunes for the 21st century...it's an impressive album." - LondonJazzNews

"It is a wonderful freewheeling affair that anyone into big band jazz will have to hear. With Django there is always a sense of mischief, intense, anarchic detail and a puckish joie de vivre combined with an almost Spike Milligan sense of humour." - Marlbank

"Charlie Parker, ever the modernist, would have appreciated this birthday gift." - The New York City Jazz Record

The trio’s chemistry remains well intact while the rich dynamics of the big band, particularly the deployment of piccolos and bass clarinets, sometimes on sparky Latin grooves, bring substantial new layers to the table.

Bates isn’t afraid to tug on the old heartstrings when needed either - on ‘Ah Leu Cha’ he allows himself a full-on gorgeous solo, to the accompaniment of his band members’ harmonious ‘oohs’ and ‘ahhs’, and even the temptation to spice things up with a little dissonance contributes to the un-ironic sentiment.