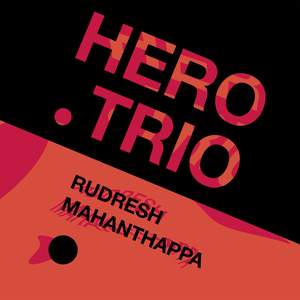 ...Yet all three players, as much as they express themselves to the full, embellishing phrases and turnarounds with no inhibition, gel as a unit. The result is an overwhelming feeling of joy... — Jazzwise, August 2020, 4 out of 5 stars More…

Over the course of an illustrious twenty-five-year career Rudresh Mahanthappa's music making has constantly pushed at the artistic boundaries to encompass such diverse influences as classic bebop, the ash and fury of electric fusion, and the complexities of Carnatic music, while always maintaining a clear sense of his own fiercely intelligent, uncompromising musical personality. On 'Hero Trio', his sixteenth release as a leader/co-leader, he has moved the focus away from his own compositions to pay tribute to his greatest influences with an album of interpretations. All of the material is presented in Mahanthappa's characteristically original arrangements, and to approach them with the greatest degree of freedom and spontaneity he chose to record in trio format, enlisting the talents of long-time associates Franois Moutin on bass and Rudy Royston on drums. Their effortless collective virtuosity, and the perfect attunement of their musical thinking honed over two decades of playing together, makes this album an outstanding addition to the genre. "Playing chordless trio, you're very exposed but you also have a degree of freedom that's very special. There's also a great history of piano trios that have a beautiful way of functioning like a single organism, and I wanted to capture that energy. I wrote the arrangements, and when we came together to rehearse I didn't have to reorganise a thing. I felt like within ten minutes we were ready to make an album."

...Yet all three players, as much as they express themselves to the full, embellishing phrases and turnarounds with no inhibition, gel as a unit. The result is an overwhelming feeling of joy amid all the ‘chops’, a desire to emote as well as excel technically.

Mahanthappa’s notions here, breezier than those of these masters, retain all the muscle of the originals.