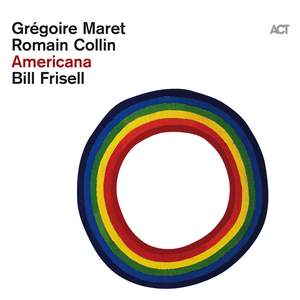 Americana is imbued with warmth and tenderness throughout. It's an endearing portrait of the intimate side of American life. These songs echo collective and individual memories as well as idiosyncratic... — AllMusic, April 2020, 4 out of 5 stars More…

“Americana” represents an exciting collaboration between two prodigious musicians: harmonica great Gregoire Maret, and acclaimed pianist Romain Collin. Grégoire Maret is a phenomenon and a master musician. He is a virtuoso with a vivid imagination and a sublime way of giving shape to a melody. Collin, meanwhile, has been described by NPR as “a visionary composer, an extraordinary jazz pianist” and by the Boston Globe as being “among the leading lights of a new breed of players”. Upon meeting each other in New York, the two musicians bonded over a shared love of jazz, song and pure melody. Together they embarked on a project which would explore the musical depths of the American soul. They turned to the uniquely great Bill Frisell to help forge a connection between American songwriting and the high art of instrumental playing. In this musical world, vast soundscapes co-exist with epic stories.

Americana is imbued with warmth and tenderness throughout. It's an endearing portrait of the intimate side of American life. These songs echo collective and individual memories as well as idiosyncratic sense impressions of those that are hoped for.