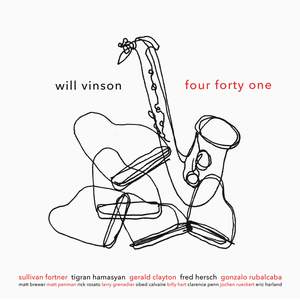 Will Vinson: I Am James Bond

Will Vinson: The Way to You

Will Vinson: That Happened

Altoist Will Vinson's debut on Whirlwind, titled 'Four Forty One', presents the realisation of a long-held dream of his - to record with five of the greatest contemporary piano masters. <p>Sullivan Fortner, Tigran Hamasyan, Gerald Clayton, Fred Hersch, and long-time associate Gonzalo Rubalcaba are each matched with their respective bass and drum team of Matt Brewer and Obed Calvaire, Matt Penman and Billy Hart, Matt Brewer and Clarence Penn, Rick Rosato and Jochen Rueckert, and Larry Grenadier and Eric Harland, to create five dream trios for Vinson to play off "as a bystander and participant at the same time." <p>Each pianist was chosen by Vinson to reflect a different aspect of his musical journey through America, and a different side of his own musical identity. The sessions were all performed with no rehearsal and a minimum of formal arrangements, to let the diverse personalities shine through. It's an experiment that has yielded unique results. <p>Originally from London, alto saxophonist/composer Will Vinson moved to New York City in 1999 and has remained there ever since. Since his arrival, he has appeared and/or recorded with Gonzalo Rubalcaba, Kurt Rosenwinkel, Ari Hoenig, Marcus Gilmore, Chris Potter, Kurt Elling, Lage Lund, Aaron Parks, and many others. <p>Will has an international reputation as a leader and sideman. All About Jazz describes Will as playing "with a relentless force". Thomas Michelsen of Denmark's Politiken, hails this "very exciting saxophonist" with a "beautiful, softly modulating tone", and John Fordham of The Guardian described a "superb solo of rugged leathery sounds turning into mellifluous high notes" with "secure control and storming energy". Time Out London calls will an "exciting young altoist with a lethal approach to writing and soloing".