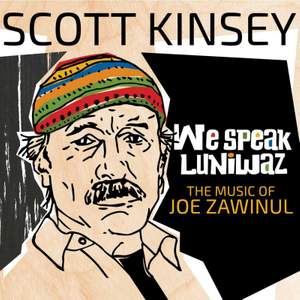 Zawinul: Victims of the Groove

Zawinul: Between the Thighs

We’re delighted to announce the signing of Scott Kinsey to Whirlwind for his release We Speak Luniwaz. The album will be available in CD • DL • and beautiful 180 gram, gatefold double vinyl and released on OCTOBER 25th. Check the teaser video to the left and read more about the incredible line-up that appears on the album below. Much more information to follow.

Widely known as one of the most skilled keyboard players of his generation, Scott Kinsey is also one of the foremost interpreters of Joe Zawinul’s rich musical legacy. As musical director of the Zawinul Legacy Band, Kinsey has delivered electrifying performances in celebration of Zawinul’s groundbreaking work with Weather Report and the Zawinul Syndicate. On We Speak Luniwaz, his Whirlwind Recordings debut, Kinsey brings his expertise to bear on re-imaginings of seven scintillating Zawinul compositions, plus one by Wayne Shorter and two originals. Joined by electric bass phenom Hadrien Feraud, saxophone/flute master Katisse Buckingham and Hungarian drummer Gergo Borlai, this accomplished crew generates sparkling energy and percolating grooves on entrancing Zawinul fare like “The Harvest” (Dialects, 1986), “Victims of the Groove” (Lost Tribes, 1992), “Black Market” (Black Market,1976), “Fast City” (Night Passage, 1980), “Between the Thighs” (Tale Spinnin’, 1975) and “Where the Moon Goes” (Procession,1983). For the funky “Cucumber Slumber,” (Mysterious Traveler, 1974), Kinsey showcases Buckingham’s skills as rapper with a testimony to Joe in a segment titled “World Citizen.”

“Zawinul’s music has been near and dear to me ever since the moment I first heard it,” Kinsey wrote in the liner notes. “My objective was to try to do justice to this material, more than anything as a little thank-you note to someone who certainly changed my life,” added Kinsey. “And someone who gave us all so much through his uncompromising and impossibly high musical standards. What Joe did was create his own personal language that was always in the moment and totally fresh! So with time, I also learned to speak Luniwaz, perhaps using my own personal dialect… I’m pretty sure he would have loved this record.”